Endowed with an imposing build and a direct stare behind his clear glasses, the Congolese Minister of Finance and Budget, Mr. Calixte NGANONGO is a firm believer of the Cartesian doctrine. Truth be told, he is part of the extremely rare breed of high dignitaries and integrated experts particularly obsessed by general interest.

A graduate in Accounting and Finance from Jean Moulin University of Lyon III, in Quai Claude Bernard in France, Minister Calixte NGANONGO started his professional career at the Caisse nationale de sécurité sociale (The National Social Security Fund - CNSS) from 1990 to 1997. He successively occupied positions of head of Recovery services; Social Security Inspector; Accounting Officer at the Deposit Guarantee Fund, a petroleum fund reserved for the management of abandoned oilfields.

Upon creation of the Société Nationale des Pétroles du Congo (Congolese National Oil Company - SNPC) in 1998, he was appointed Head of Finance and Accounting Department. With the review of SNPC’s statutes by the Council of Ministers and its subsequent endorsement by presidential decree of 21 August 2010, Calixte NGANONGO was appointed a member of the new board of directors. He occupied the prestigious position of Deputy Director General in charge of Finance and Accounting of the Congolese petroleum giant which contributes 80% of the Congolese State budget.

He prides himself of being above all a man of mission who has always had the desire of serving his country with loyalty. Today, fate has smiled on him once again. Since 30 April 2016, he has occupied the prestigious and particularly coveted position of Minister of Finance and Budget.

A partisan of financial rectitude, this simple and calm family man is also a great lover of sports. A former international player with the Diables Rouges Volley-Ball team of which he was captain, he went on to become the coach and later the national technical director.

Having attained the rank of a monetary authority in his country, he considers himself as a dignitary at the service of the State. It is on the strength of these attributes that he benefits from a high esteem in the society as well as in highly exoteric finance circles.

It is believed, by a vast majority of his compatriots, that he is a workaholic. 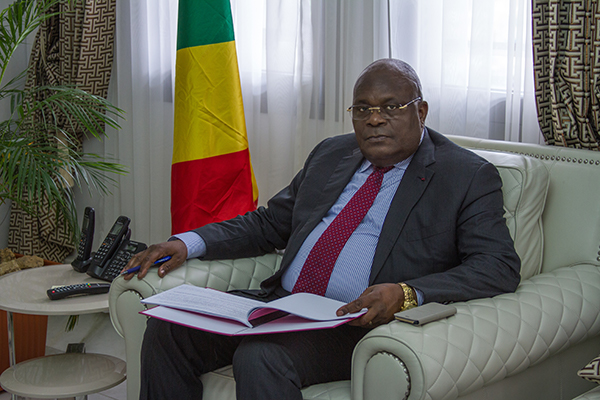 Presentation of the 2019 Budget at the National Assembly