The 13th ordinary meeting of the Steering Committee (COPIL) of the Economic and Financial Reform Program of the Central African Economic and Monetary Community (PREF-CEMAC) was held by videoconference on Thursday, April 15, 2021 in Brazzaville. Under the auspices of its Chairman, Gilbert Ondongo, Congolese Minister of State in charge of Economy, Industry and Public portfolio. He was assisted by Ludovic Ngatsé, Congolese Minister in charge of Budget. Five integrating projects will start in 2021.

The conclusions of this meeting were delivered to the press by Michel-Cyr Djiena Wembou, Permanent Secretary of COPIL, in the presence of Daniel Ona Ondo, Chairman of the CEMAC Commission.

"The highlights of this meeting were to see first how to coordinate the response of the Ministers of Economy and Finance to the COVID-19 pandemic. As you know, the Heads of State had convened an urgent meeting of ministers in Brazzaville in March 2021. The purpose of this meeting was, first, to assess the impact of this pandemic on our economies. Second, to take action. We are often criticized for not evaluating the measures taken.

22 measures had been taken, and we met today to evaluate these measures: with regard to vaccination, the improvement of medical technical platforms, epidemiological surveillance, support for businesses, preventive measures, etc.

So, first goal: what to do and how to manage the funding that has been made available to us?

Second element of the meeting: discuss, then, the future of the reforms, because we were coming out of the red zone. COVID-19 has come and our economies have now fallen into the negative sign. Growth has become sluggish. But, we don't die because there is a pandemic. We have to get back on our feet. So we had to review the new elements of the Recovery Plan, and see how to succeed in reviving the private sector that occupies a good part of our populations.

Third, we discussed the Reform Agenda for the Future, adopted in 2017. We are in 2021, priorities have changed; emergencies have changed; oil prices are not what they used to be; credit will never be what it used to be; health issues cannot be underestimated in our budgets. How do we review our finance laws; how do we plan the next reforms? Hence, the adoption of a new document, called the New Economic and Financial Reform Program Document for the years 2021 to 2025. But, at the same time, we have reflected on the Report of what happened in 2020, because we must draw the consequences of the situation, to move forward. We have been criticized too much for doing theory without practice.

What are we planning?

First of all, we expect that, of the measures that were included in the old plan, only those that affect the population will be retained. In other words, we should no longer be concerned only with financial stabilization and the currency. We must deal with social issues: education, health, etc. Because we have seen that we are all equal in terms of health and death. We must also take steps to ensure that economies do not fall apart. We must also anticipate, by ensuring that wealth is no longer exported without local development. We have talked a lot. The time has come for us to take charge. Because we have seen that in the event of a situation, it is we ourselves who should first solve our own problems, before calling on others.

We also reflected on the role of banks in financing development.

One thing is to have banks that have a lot of money, that are fluid. Another is to know how to ensure that these banks can finance the economy. So how do we move from the theory of improving the business climate to the practice of real improvement? How can we ensure that the tax authorities are better organized and that the customs authorities work smoothly?

How can we also ensure that the justice system is fair, that the land registry is renovated (because no one will invest if they know that if there is a problem, their land or building will be taken away)? No one will tell the extent of their resources if they know that if they do, they will be reported to the courts, where they risk losing the case.

Furthermore, we have talked about increasing trade, but that is too much theory! Now we have to decide on joint posts. Enough is enough: we can no longer have, for example, a thousand roadblocks between Brazzaville and Yaoundé. We are going to submit this issue to the heads of state: either we choose the European Union model, with controls every 80 km, or, as is the case in Eastern Europe, every 130 km. We will then find the police, the customs, the gendarmerie and everyone in the same post, to really develop trade between us.

There is only one question left: that of the CEMAC passport. We had the guarantee of Gabon for the community passport. The proof: all the delegates to this meeting came to Brazzaville without visas. The next step is for us to move on to the fact that people travel with the national identity card. This means that real birth certificates should be issued to our children, that civil status should be secured, that there should be no falser birth certificates, that elections should no longer be used by voting with three identity cards. Hence the decision to involve Interpol in the system for securing civil status.

Finally, we discussed the issue of CEMAC's priority integration projects.When we met in Paris from 16 to 17 November 2020, under the very high patronage of His Excellency Denis Sassou-N'Guesso, represented by His Excellency the Prime Minister of Congo, Clément Mouamba, we mobilized 3 billion 800 million euros. People thought that this was just theory and that, as usual, it would not be followed up. Today, thanks to the decision of the President of the COPIL, we have had two technical meetings. These meetings were attended, for the first time, by all the donors (World Bank, Islamic Development Bank, African Development Bank) as well as all the states and private investors.

It was a question of seeing: 1- if the resources announced are confirmed; 2- what types of resources were announced; 3- within what timeframe; 4- how to match these resources to set up a project and make the financial arrangements within a given timeframe. Thus, we were able to identify what is available (...).

In short, out of 11 priority projects, 5 will start in 2021, including the Congo-RCA-Chad road; the project to build a joint Congo-Cameroon University; the construction of the Cholé dam (with electrical interconnection between Cameroon and Chad); the construction of two dry ports in P.P.P. (Public-Private Partnership) and B.O.T. (Build Operate and Transfer) mode...". 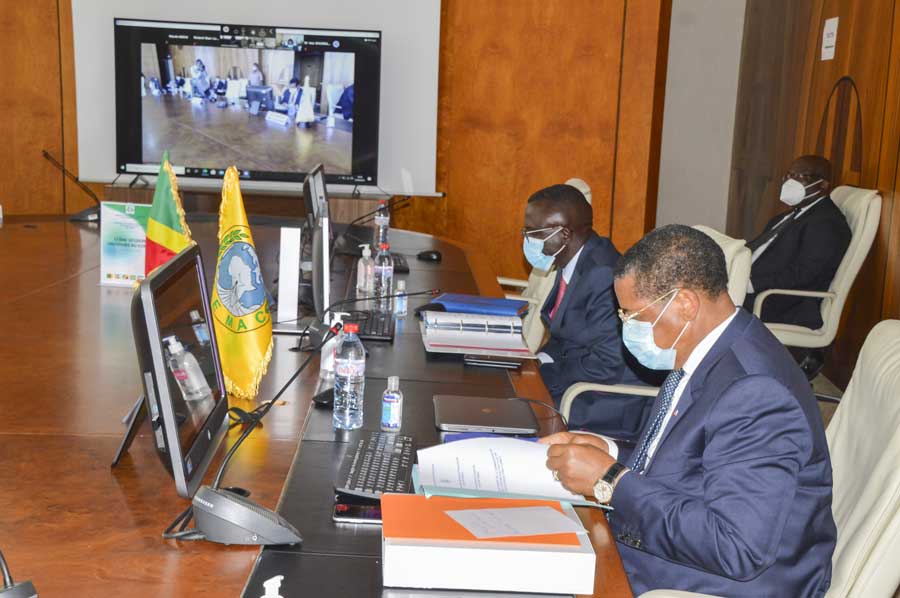