55th Anniversary of the Sino-Congo Cooperation

The Government of Congo and West African Group sign the Constituent Acts of the National Development Fund of Congo (FNDC)
28 Feb, 2019

As part of the Comprehensive Strategic Partnership concluded between the Republic of Congo and the China People's Republic since 2016, the Minister of Finance and the Budget, Calixte Nganongo and the Chief Executive Officer (CEO) of the Chinese company West-african group, Hui Kouyin, signed thursday 28 February 2019 in Brazzaville, the Constituent Acts of the National Development Fund of Congo (FNDC).

“FNDC is a new tool dedicated to the economic and social development of Congo. It translates into action the will of the Head of State, Denis Sassou-N'Guesso, who had initiated in 2014, the establishment of the National Economic and Social Development Fund (FNDES), through the enactment of Law N0. 17-2014 of 13 June 2014. This was to support public policies conducted by the State and local authorities for the development of Congo”, Minister Calixte Nganongo said.

The Fund is intended to finance development projects for local authorities, businesses, cooperatives and other production groups in various fields, such as: agriculture, industry, public health, education, etc.

A public limited company under Congolese law, FNDC is equally owned by the Congolese State and West-african group, a chinese company founded in 1998 in Congo. Its mission is to support the economic development of Congo by facilitating, among other things, the promotion of development with chinese investors. It will work to mobilize financial resources from various institutions, in order to facilitate the funding of investment projects in Congo.

At a time when Congo is developing rigorous financial and fiscal practices, characterized by the search for macroeconomic balances in a logic of institutional reforms, the launching of FNDC is a real opportunity to support investment, while preserving the sustainability of the debt.  It must make it possible to widen the possibilities of capital mobilization and value providers. It represents an additional link in the configuration of the financial ecosystem of Congo geared towards the establishment of a mechanism for optimal allocation of resources.

FNDC, a tool for economic diversification

“Economic diversification cannot be decreed.  It is build on tools adapted to the service of motivated and relevant actors. This is the direction chosen by FNDC which will focus its activities on the consolidation of value chains and the financing of projects generating economic and social growth. Its action plan integrates the priorities of the National Development Plan (PND), thus contributing to the implementation of the social project of the Head of State, Denis Sassou-N’Guesso”, the Minister of Finance said.

For his part, the CEO Huo Kouyin announced that chinese companies will put in place many factories and farms in Congo, both in cities and in the countrysides. They will teach local people how to produce and process loacal products, thereby promoting the development of non-oil economy, job opportunity and education in the hinterland.

Following the establishment of the Sino-Congo Bank for Africa (BSCA) in Brazzaville, in 2018, the signing of the Constituent Acts is one of the highlights of the realization of bilateral ties established for 55 years, on 22 February 1964, between Congo and China. 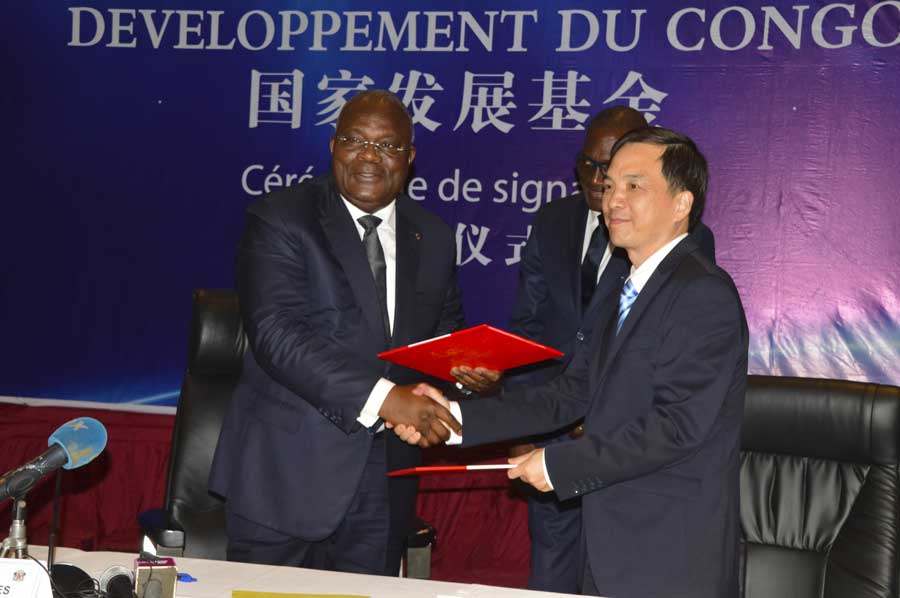