On the theme : “The territorial Administration: its challenges for the year 2019”, the Conference of Prefects extended to president of county and municipal Councils, took place from last Thursday 14 to Saturday 16 February in Ouesso, in the Sangha division. On this occasion, Calixte Nganongo, Ministrer of Finance and Budget, presented on the sub-theme: “Reforming Public FInance Governance and Impact on Local Authorities Tax Revenue.”

This issue, according to the Minister of Finance, derives its substance from the organic laws; law relating to the Code of transparency voted in 2017, in order to guarantee good governance of public finance; as well as from the decree on the general regulation of public accounting that determine the general principles of public accounting applicable to the State, local authorities and administrative public institutions at the national and local level.

In his presentation, the speaker noted that there is a problem of retrocession of funds collected on behalf of local authorities, on the basis of the distributions principles codified in the laws in force. With reference to section 250 of the General Code of Tax (CGI) Volume I, taxes that may be enjoyed by local authorities, are: the contribution of the license; the occupancy tax of the premices, the tax on the towers of telecommunication companies; built and unbuilt land taxes; the county and municipal tax when they apply; others such as the entetainment tax, gaming, existing surchages on value Added Tax and registration fees.

With regards to the license, the aforementioned distribution remains the same (90 and 10 per cent), local authorities collect 85 per cent of the proceed and the 5 per cent return to the budgets of chambers of commerce and non-commercial organizations legally established and recognized as such by the State.

However, many malfunction in the financial departments prevent the proper execution of the process of collection and distribution of local taxes in the best conditions, said Calixte Nganongo.

Reforms initiated by the Minister of Finance to solve this

Because of this numerous malfunctions, Calixte Nganongo undertook a vast programme of Public Finance Reform, whose main objective is to improve on its governance and later, to better ensure the revenue collection chains, as well as that of the expenditure of the Congolese Tax system.

On the functional level, faced with various challenges and given the economic environment of Congo, it is necessary, for Calixte Nganongo, that the retrocession is now done on the basis of equalization,so that the communities collect taxes in the form of a grant, to avoid any inequality between the communities that collect the most taxes and those that cannot do so for several reasons.

Another reform: Calixte Nganongo wished to vulgarize the computerization of all the procedures in order to make them more transparent, reliable, effective, and thus facilitating the steering of the public action in Congo. He therefore approved the launching of projects such as, the Integrate Public Finance System (SIGFIP) that should allow for the interconnexion between the various financial departments, especially through the Unique Identification Number (UIN), by means of the fingerprint and the iris of the eye, to facilitate the recovery of receipts, as well as the distribution of these receipts between the State and the local authorities ; the new computerized tax collection system (E-TAX) which should allow for a fully dematerialized management of Congo's entire tax system with special emphasis on security, traceability and transparency.

The Minister of Finance takes note of the grievances of Prefects, Mayors and Presidents of county Councils

The occasion was ideal for Calixte Nganongo and his colleagues of the Government to learn about the difficulties of prefects, mayors and presidents of county Councils.  Among which, the routing by March 2019 in Djambala of 1000 books and 9 computers obtained by the mayors of this city of the Plateaux division, Emmanuel Mpio, near an European city; as well as the continuation of the construction work of the headquarter of the Kouilou county council, suspended for a certain time, for lack of funding.

Note for the posterity that Calixte Nganongo is the first Minister of Finance to take part in the Conference of prefects, since it was instituted. At the edition of Ouesso, he had at his side 6 colleagues, namely: Raymond Zéphirin Mboulou (in charge of Interior and Decentralization); Antoine Collinet Makosso (Primary and Secondary Education and Literacy); Antoine Nicéphore Thomas Saint (Technical and vocational Education, Skilled Training and Employment); Ingrid Olga Ghislaine Ebouka-Babackas (Planning, Statistics and Regional Integration); Emile Ouosso (Equipment and Road Maintenance)) and Charles Nganfouomo (Decentralization). 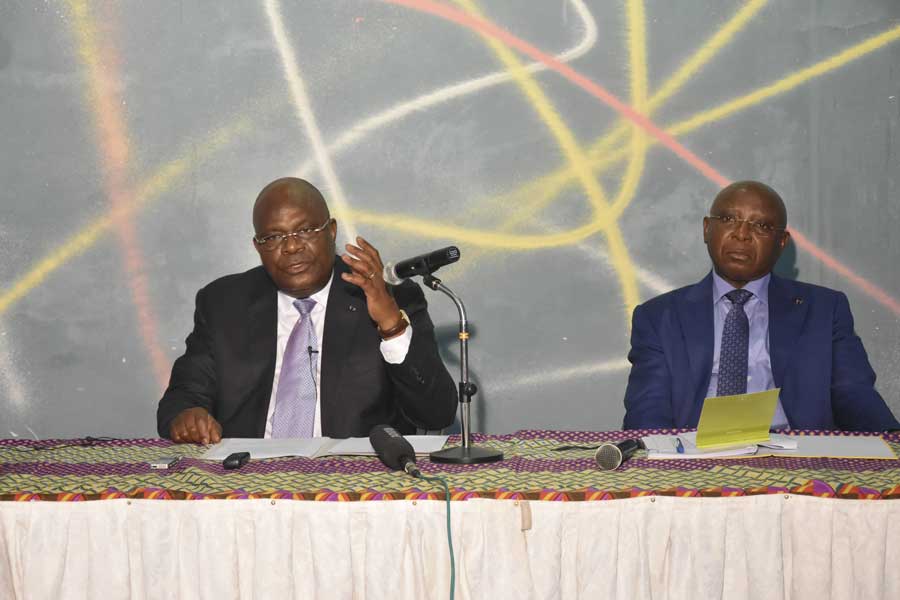