The two houses of parliament, the National Assembly and the Senate, successively adopted on the 4 and 5 July 2016 during a plenary session at the Palais des congrès, in Brazzaville, the amended bill on the rectified State budget for 2016. Set by the government at 3.776 Billion 169 Million CFA Francs, the budget was actually adopted by the two houses of parliament at 3.623 Billion 11 Million CFA Francs.

The rectified finance bill was defended by the Minister of Finance, Budget and Public Portfolio, Calixte Nganongo.

According to Minister Calixte Nganongo, the government rectified budget hypotheses of the initial finance law. This implies taking into consideration the putting in place of the new executive team, thereby modifying the organic and operational setup of government action; Consultative councils instituted by the new constitution which was not provided for in the initial finance law. The third hypothesis which led to the modification of the finance law is the continuing drop in oil prices. Hypotheses retained in the drafting of this rectified finance bill, as far as oil revenues are concerned are:

For the Minister of Finance, government’s policy shall centre on three main priorities translating the will of the President of the Republic, namely:

Following this re-evaluation, the State’s budget resources sum up to 2.121 Billion 468 Million CFA Francs (as against 2.333 Billion in the initial finance law). The budget is distributed as follows:

By way of recommendations, the Economy and Finance Committee requested the government to forward to parliament on a quarterly-basis reports on budget execution; to systematize tax payments through bank transfers for all mounts greater than 100.000 CFA Francs. The Commission asked Parliament to seize the Court of Audit and Budgetary Discipline on the situation of institutions and companies of public portfolio, etc.

Questioned on exonerations, Minister Calixte Nganongo simply said his country needs resources. “We need to be focused on the issue. We are faced with something immense as far as taxation is concerned. Of 100% exoneration, 20% concerns routine traffic and 80% in oil. That is a real problem. We cannot leave everything there. We shall stretch our hands where we can but for now, since we are in search of resources, we shall manage with the 20%” he emphasized. Talking about Congo’s debt, he said it was quite huge. Notwithstanding, the Minister stated that the country just paid its debt to three rating agencies. It is worth mentioning that the National Assembly was led by its President, Justin Koumba, and the Senate by its President André Obami Itou. 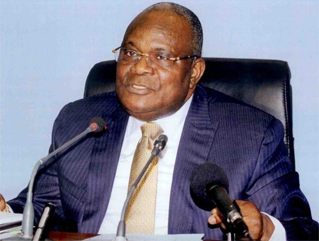