The contribution of Fécofoot, ICC Church, religious Confessions of Congo and the Rwandan Community of Congo amounts to 32 million F CFA.
26 May, 2020

Responding to the call of the Head of State, Denis Sassou-N'Guesso, launched on Saturday, March 28, 2020, to replenish the National Solidarity Fund and the Covid-19 Fund, the Congolese Football Federation (Fécofoot), the Eglise impact centre chrétien (ICC) in Brazzaville, Religious Confessions of Congo and the Rwandan Community of Congo contributed a total of 32 million CFA francs in cash.

The ceremony of handing over the cheques took place in the conference room of the Ministry of Finance and Budget on Tuesday 26 May 2020, under the chairmanship of the Minister Delegate in charge of Budget, Ludovic Ngatsé.

The Fécofoot delegation, led by its president, Jean Guy Blaise Mayolas and assisted by the Minister of Sports and Physical Education, Hugues Ngouélondélé, contributed 12 million CFA francs. It was followed, in turn, by the Impact Christian Centre Church, led by Pastor Habi Castanou, who contributed 10 million CFA francs; the Religious Confessions of Congo (Catholic, Evangelical, Islamic, Salvationist, Kimbanguist and Revivalist), represented by the Archbishop of Brazzaville, Anatole Milandou, and their spokesman, El Hadj Dibril Bopaka, whose cheque is 5 million CFA francs; and by the Rwandan Community of Congo, led by Aloïse Bayingana, whose solidarity for the fight against Covid-19 is 5 million F CFA.

The Minister Delegate in charge of the Budget, who is very sensitive, undertook to convey this mark of encouragement from civil society to the Head of State, Denis Sassou-N'Guesso, and his Prime Minister, Head of Government, Clément Mouamba.

The press office of the Ministry of Finance 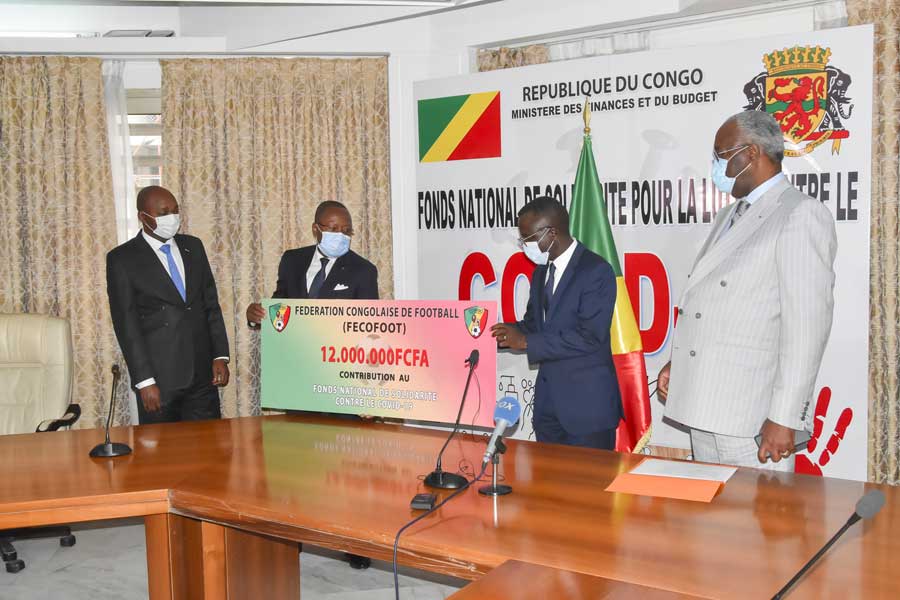