Presentation of the 2017 finance bill

In an economic and financial situation marked by the fall in price of a barrel of oil, the government's efforts will be oriented towards mobilization of non-oil revenues. Tax revenues amount to 1014 Billion 652 Million CFAF for 2017, of which CFAF 819 Billion for domestic taxes and 210 Billion for customs duties. The mobilization and securing of tax and customs revenues remains a major objective, to sustain the improvement of budget revenues in 2017. This objective will only be attained through the strengthening of the fight against fraud, tax evasion and a control of exoneration.

Due to the constraining economic and financial situation marked by a drastic drop in resources, the government intends to adapt the State’s living standards to mobilizable resources. For Minister Calixte Nganongo, with this so-called cautious budget, "the government will ensure that the choices made are respected, public expenditure effectively controlled and that there is more efficiency in their execution".  Among priorities chosen by the Government in these difficult conditions is the
Implementation of the new 2017-2021 National Development Program (PND) currently under review. "With a view to improving the economic situation, we must plan the new PND to integrate the uncompleted projects of the previous 2012-2016 PND on  one hand and projects selected within the framework of  implementation of the Head of State’s community project ( the drive for development) on the other hand " the finance minister announced. He also indicated that the year 2017 will be marked by the organization of legislative and local elections, as part of the continuation of the process initiated by the New Republic.
"Particular attention will be paid to related expenses” Minister Calixte Nganongo insisted.

Other priorities mentioned by the same speaker take into account the respect of commitments made by the Government to the social partners, notably the increase in salaries of civil servants, which will reach its final stage in 2017 and commitments on debt. It has to do with government taking into account the Congolese financial counterparts on projects funded in partnership, and guaranteeing macroeconomic stability and fiscal sustainability. The Government also intends to carry out investment projects, which are in line with the dynamics of economic diversification and to complete some on-going priority projects.

With these various commitments, staff expenditure, which in 2016 stood at 410 Billion CFAF, rose to 451 Billion 100 Million CFAF in 2017, an increase of 10% as a result of the increase in salary scale by an index of 300. As for current operating expenses, i.e. goods, services and sundry expenses, they are forecast at 289 Billion 997 Million CFA in 2017, as against 301 Billion 565 Million CFAF in 2016, a decrease of 3.84%. Transfer and intervention expenditure is estimated at 360 Billion CFA Francs, including 80 Billion CFA Francs for elections, 37 Billion 544 Million for scholarships, and 68 Billion for democratic institutions, 85 Billion 207 Million CFAF for subsidies to public institutions and CFAF 72 Billion CFAF 911 Million for interventions. Capital expenditure have dropped drastically by 27.52% and stand at 978 Billion CFA francs of which 292 Billion 537 Million CFAF are funded exclusively by internal resources  related to counterparts and to on-going projects. The remainder is funded out of external resources amounting to 685 Billion 883 CFAF.

Government’s strategy in the face this economic crisis

In the context of the crisis, achieving the objectives in terms of revenue and expenditure requires the implementation of a binding budget policy. To this end, several measures are advocated by the tax administration, at the level of customs and the petroleum sector. As for measures applicable to oil revenue for their traceability, the bread basket of the Republic came up with a number of recommendations.

Among these, compliance with the agreement signed between the National Oil Company of the Congo (SNPC) and the State. It obliges the SNPC, to repay to the public treasury in due time, products of sale of cargoes and all revenues collected on behalf of the State. We can also mention recommendations on improvement and reinforcement of the control system of setting up oil prices (invitation to tender, commitment of expenditure, management committee); Strengthening the monitoring and control of the State’s  oil taxes and material balance sheets; Updating in the finance law and respective codes  offenses and penalties in the domain of taxation and oil prices, in order to make these penalties more coercive and strengthen their collection; Strengthening monitoring of disposals of petroleum products and equipment, especially those amortized or in relation to abandoned oil permits. As regards customs measures, the mobilization of customs revenue for 2017 will be particularly based on the systematic use of the scanner to optimize and simplify customs clearance procedures, supported by a policy of risk analysis and the abolition of exceptional exonerations. Among the measures recommended by the tax administration is the deployment of applications of the Automated Tax Treatment System (SYSTAF) to divisional inspectorates of the outskirts of Brazzaville and Pointe-Noire as well as the interconnection of the customs and taxation databases. In conclusion, the Minister of Finance urged parliamentarians to become conscious of these challenges which are of proven severity. "This budget relies on an adjustment strategy for the search for the necessary balances in view of the viability and sustainability of our fiscal policy", underlined the Congolese Finance Minister. He also drew the attention of the elected representatives of the people to the fact that several indicators place the Republic of Congo in a position that forces it to make adjustments. In order to prevent this adjustment from being imposed from outside as in the past, with its attendant consequences, Calixte Ganongo called for a change in behaviour, particularly in relation to tax compliance and expenditure. 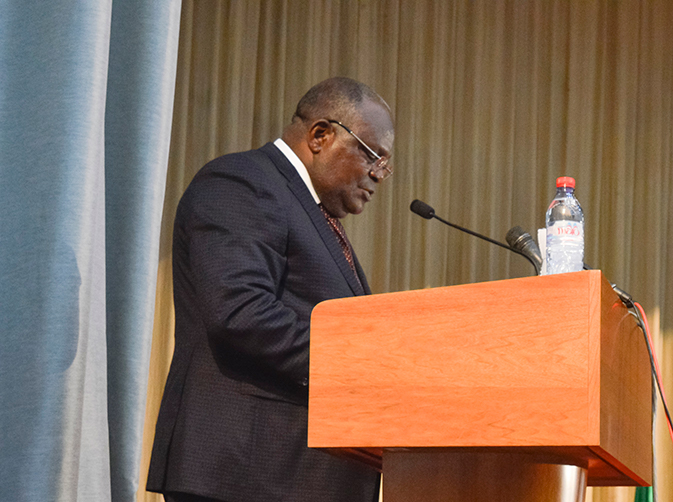