The Prime Minister, head of the Congolese government, held a press conference on Tuesday, October 10, 2017 in Brazzaville. On this occasion,  honourable Clément Mouamba focused on the  mission of  the International Monetary Fund (IMF) which took place from Monday, September 25, to Wednesday,  October 4, 2017 on talks with the Congo on debt and governance. The speaker said he was confident about the economic recovery of the country, which has various sources to replenish its coffers, despite its debt to the IMF estimated at 5,329 billion CFA francs or 110% of the gross domestic product (GDP). He answered questions about Congo's debt, tax loopholes, the future generations Account and Congo's loans to its African neighbours.

"The IMF has received the information it needed. I cannot say that the talks have failed because we are still at the beginning of a process. Congo  cannot regain macroeconomic equilibrium, unless the IMF gets involved so as to get the country out of the current situation. The Fund is our partner and its support will make investors confident,"

He noted that the IMF should help the Congo (to) improve its revenue levels and master public spending, while avoiding debts. The two parties will sign a three-year program, which sometimes will make Congo face constraints, difficult choices, while preserving its social gains.

He further said  that Congo did report everything about its debts to the IMF. The country owes 1,242 billion CFA francs to traders who have been directly withdrawing the amounts due for some time. Congo owes 2,201 billion CFA francs to its bilateral partners, of which nearly 1,400 billion to China.

Regarding the loans that Congo has granted to sister countries such as Chad, Côte d' Ivoire, Guinea-Conakry, Niger and the Central African Republic (CAR), repayment is made through a bank account, he reassured.

With regard to funds for future generations, the Prime Minister acknowledged that when he was appointed  in 2016, he found 400 billion CFA francs in the account opened at the Bank of Central African States (BEAC), which enabled  the completion of some emergency work.

Honourable Clément Mouamba said that apart from oil whose price has been low on the world market since 2014, Congo, whose budget is essentially based on revenues from the sale of black gold, has other revenue mobilization opportunities, notably the use of existing resources such as customs and tax revenues.

It was realized that resource loopholes exist in sectors such as forestry, land, etc.". If we asked each Congolese to obtain a land title for his plot at a fair price, 60,000 CFA francs for example, it would generate a lot of money," he said.  The objective is to make oil an additional resource by raising  financial resources in other sectors of the economy. Congo is in trouble, it is true; but the country is on its feet and knows where it is going," the Prime Minister reassured.

With regard to reforms, the Prime Minister declared that last year's census of the civil servants  had made it possible to clean the civil service register, which now has a total number of about 66,000 persons.

"We are going to rule on the governance of these companies, which we consider inefficient today. They are virtually bankrupt. The reforms have begun and will take long , because it is necessary to precise their tasks  of those companies", honourable Clément Mouamba concluded. 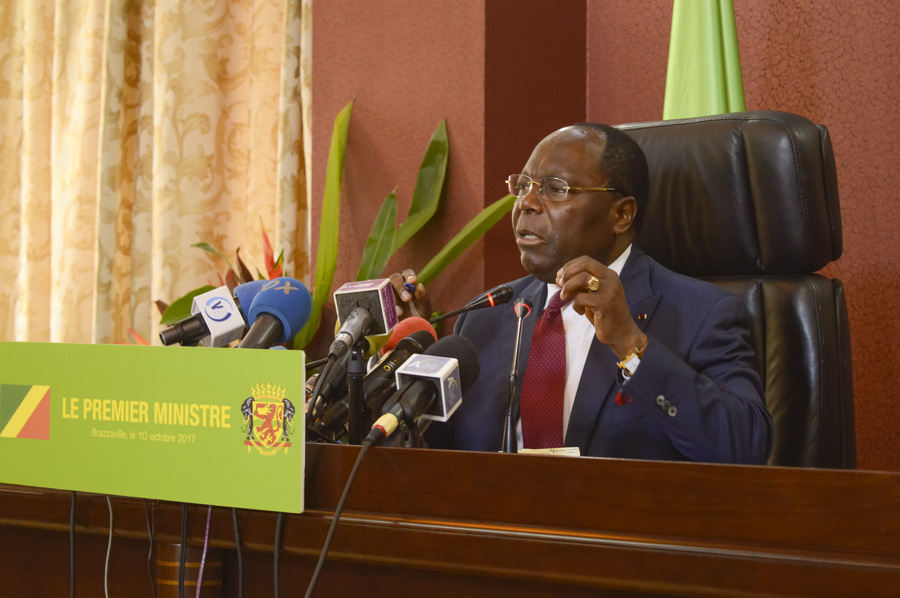