Press conference of the Prime Minister, Head of Government

“The Congo - International Monetary Fund Agreement is the most reasonable decision”
18 Jul, 2019

Before the national and international press, the Prime Minister, Head of Government, Clément Mouamba, held, Thursday 18 July 2019 in Brazzaville, a press conference in the auditorium of the Ministry of Foreign Affairs, Cooperation and Congolese Diaspora. The Extended Credit Facility (ECF) Agreement between Congo and the International Monetary Fund (IMF), signed in Washington DC (USA) on 11 July, was the focus of this exchange.

According to the speaker, “the Congo-IMF Agreement is not a panacea. It is the least harm. It is the most reasonable and responsible decision, agreed on politically, economically and socially.”

During this communication, Clément Mouamba explained to journalists the legitimacy of the discussions with the International Monetary Fund (IMF), the culmination of the discussions initiated for many months, specifically in 2017, in order to reach a Financial Assistance Agreement, not only from the IMF, but also from international institutions like the World Bank (WB), the African Development Bank (ADB) and from other States such as France, a bilateral partner. According to the Prime Minister, the signing of this Agreement was a trigger for other financial aid to Congo.

For example, over the next three years, Congo will receive financial assistance from ADB (262 billion FCFA); WB will provide 171 billion FCFA; IMF (259 billion FCFA), and France 89 billion FCFA. “This assistance will decisively support Congo's efforts to restore macroeconomic balances, consolidate public finance and stabilise the level of its foreign exchange reserves”, he said.

The Programme concluded on 11 July 2019, include 40 measures to be implemented within the pre-set deadlines during these 3 years. In particular, a consolidation of public finance based on better mobilisation of tax resources and control of expenditure, in line with the measures already implemented as part of the budgets for 2018 and 2019 financial years. The Programmes also recommends that the authorities should preserve the State's capacity to invest in infrastructure and to fund social projects for the benefit of the most vulnerable populations, in terms of health, education, access to water and electricity, and women empowerment. It also recommends improving governance in all its components.

In addition, the restoration of public finance requires a reorganisation of the public debt.

As a reminder, on 28 April 2019 in Beijing, Congo signed an agreement to reschedul its private debt to China, which will help restore the long-term sustainability of its public debt.

In the opinion of the Prime Minister, the Congolese Government's fiscal adjustment efforts and those made by its creditors, together with the assistance provided by its development partners, will improve its public finance to enable a successful implementation of the 2018-2022 National Development Plan (PND) which is its matrix.

This improvement, he continued, will allow the State to pay back gradually, after audit, the domestic arrears accumulated in recent years. Adding that the repayment of domestic arrears will strongly contribute to strengthen the financial system and to boost the economic activity.

Answers to some questions from journalists

As for the repatriation of public funds that would be placed in tax havens, according to social networks, the Prime Minister said that he is not aware of the public funds deposited in banks that no one can control abroad. “If it is private money, I do not know, either”, he said bluntly.

Asked to comment on of the debts Congo had granted to some countries of the Economic Community of West African States (ECOWAS),the speaker noted that these States are still in a state of grace, and that they are aware that Congo is going through a difficult situation today. When the time comes, they will pay off their debts.

Speaking of the decline in Congo's foreign exchange reserves, Clément Mouamba recognise that this is a real problem, which does not leave the authorities of this country indifferent.

The Prime Minister took the opportunity offered by this press conference to draw the attention of traders who are beginning to increase the prices of basic commodities on the market, under the pretext that Congo would have received a lot of money from the IMF since July 11 July 2019. “It is not a responsible behaviour on the part of these speculative traders who drive up prices”, Clément Mouamba denounced.

The Press office of the Ministy of Finance 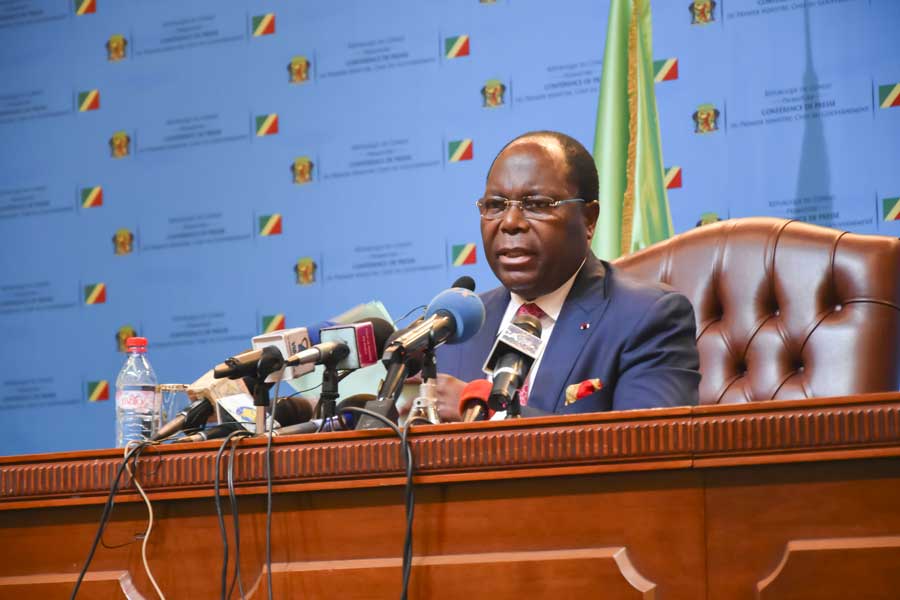