On Saturday 18 and Monday 20 December 2021 in Brazzaville, the two House of the Congolese Parliament successively adopted unanimously (with amendment, for the lower House, and without amendment, for the upper House) the State finance bill for 2022 fiscal year, at the amount of 1935 billion 253 million in revenue and 1, 734 billion 964 million CFA francs in expenditure. The session was presided over by Isidore Mvouba, Speaker of the National Assembly, and Pierre Ngolo, President of the Senate, respectively. Rigobert Roger Andely, Minister of Finance, Budget and Public Portfolio, and Ludovic Ngatsé, Minister Delegate for the Budget, were also present.

The projected budget surplus of CFAF 200 billion 289 million will help to reduce the deficit in financing resources. In terms of financing and cash flow in 2022, the Finance Law projects a cash flow deficit estimated at CFAF 607 billion 874 million, which will be financed as follows: internal financing: CFAF 200 billion 289 million; external financing (contribution from international donors): CFAF 407 billion 585 million.

According to the Macroeconomic and Budgetary Framework Committee, the economic recession is expected to ease by 0.5% in 2021, compared with -5.3% in 2020, in line with a recovery in economic activity in the non-oil sector. In 2022, the Congolese economy is expected to emerge from two years of recession, with a projected growth rate of 2.3%.

General orientation for the 2022 finance bill

At the strategic level, the specific objectives for 2022 stem from the general orientation of the Medium-Term Budgetary Framework (MTBF 2022-2024). This orientation is itself the result of the President of the Republic's five-year societal project ‘’Together let us continue the march’’ (2021-2026). This societal project comprises nine points which form the main basis of the National Development Plan (NDP) 2022-2026, currently being finalised.

On the budgetary level, capacity building for tax services and governance will be the leitmotiv, based on the modernisation of resource-providing administrations, the strengthening of tax policy and the rationalisation of tax expenditure. The aim is to ensure the efficiency of public spending on the main targets (for example, the compensation of victims of the 4 March 2012 tragedy; the recruitment of State employees in the education and health sectors; and the payment of retirement pensions). It is also recommended that the dynamics of unsustainable debt be contained, and that the risks and costs be controlled, in order to improve the debt portfolio. This would lead to 1- reducing the non-oil primary deficit, to bring it back progressively to a sustainable level in the medium term; 2- eliminating the leakage of public resources in all their forms, with the aim of improving performance;

and 3- reinforcing transparency, particularly in the management of natural resources, and establishing mechanisms to fight against corruption.

Assumptions for the 2022 budget, main aggregates and measures to be taken

The budgetary aggregates are obtained from prudent assumptions, which reflect the parameters of the economic activity projected in 2022 for revenue, on the one hand, and the control of state expenditure, in line with the Medium-Term Budgetary Framework, on the other.

The main assumptions are as follows: a projected growth rate of 2.3% for overall GDP; an increase in the volume of import (3.4%) and export (1.1% of GDP) activity in 2022, notably the increase in the volume of activity in the non-oil sector; a prudent level of donations, bequests and assistance funds, assessed on the basis of existing agreements; drawing capacities and commitments made in other areas of the economy.

New agreements with certain development partners; levies for social contributions indexed to the overall level of the public administration's wage bill; an oil production level of 110 million barrels (with a barrel set at 64 US dollars; the dollar being exchanged at 550 CFA francs); administrative reform, which includes the continuation of the computerisation of the various financial departments, in general, and the organisation of the tax administration, in particular; and the validation of the Report and the application of measures relating to the Commission for the Renegotiation of Settlement Agreements.

In 2022, the fiscal policy monitoring indicators (notably the overall fiscal balance, the basic fiscal balance and the non-oil primary balances, in relation to non-oil GDP) will improve significantly, to stand at 4.3%, 7.93% and -15.38% respectively, compared with 3.41%, 6.26% and -15.80% in 2021. The non-oil primary balance reveals the vulnerability and low resilience of the country's public finances to exogenous shocks. Hence, the urgent need to diversify the economy, in accordance with the social plan of the Head of State, Denis Sassou-N'Guesso.

Defended (first in the Economic, Finance and Budget Execution Control Commission, then in plenary session) by the Minister of Finance, Budget and Public Portfolio, Rigobert Roger Andely, the finance bill for 2022 fiscal year is, according to him, ‘’a budget developed not only in relation to the Economic and Financial Reform Programme of the Economic and Monetary Community of Central Africa (PREF-CEMAC), but also with the one being negotiated with the International Monetary Fund (IMF)’’. 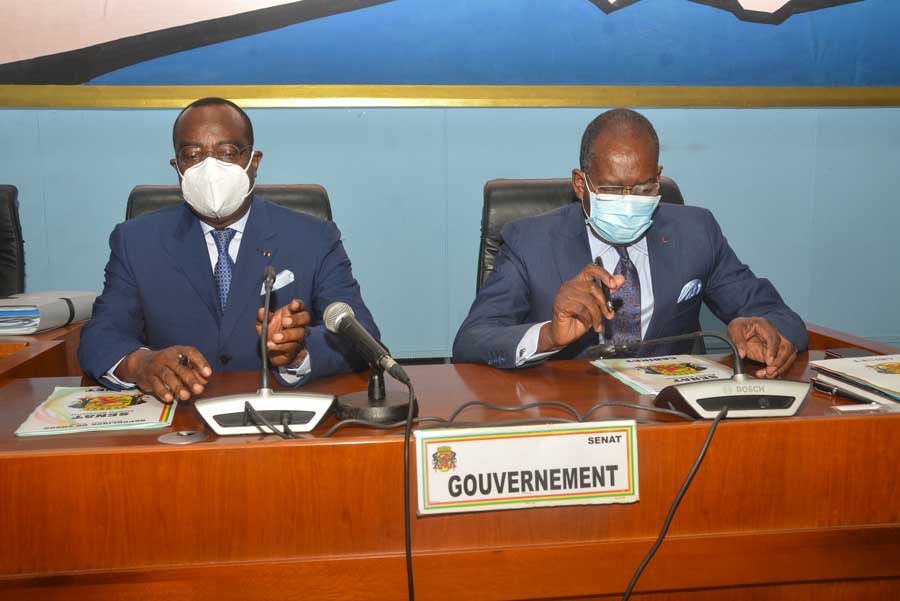