The Development Bank of Central African States (BDEAC) held its General Assembly on Monday, June 14, 2021 in Brazzaville (Republic of Congo), by videoconference. The meeting was chaired by Mr Ludovic Ngatsé, Minister Delegate in charge of the Budget, representing Mr Rigobert Roger Andely, Minister of Finance, Budget and Public Portfolio, acting Chairman of the General Assembly, during which the shareholders commended the exceptional financial performance of BDEAC in the context of COVID-19.

According to a press release, during the meeting, shareholders noted with satisfaction the efficiency of the Bank's operations management for the year 2020. Based on the excellent results obtained during the last four years, BDEAC recorded, during the financial year ended December 31, 2020, a net profit of CFA F 9.8 billion, i.e. 153% of the budget forecasts. This exceptional result approved by the shareholders was obtained in a context of economic crisis caused by the COVID-19 pandemic. It is the result of the strategy implemented by the Bank during the year 2020, particularly in terms of project financing and resource mobilization, debt collection and cost control.

This source indicates that BDEAC has maintained a good level of project financing, from both the public and private sectors, resulting in nineteen (19) projects approved for a total of about CFAF 186 billion. Following the same dynamic and with the aim of strengthening the resilience of the economies of the Central African Economic and Monetary Community (CEMAC), a disbursement of CFAF 118 billion in favor of economic operators in the subregion was recorded, compared with only CFAF 49 billion the previous year. At the socio-economic level, the implementation of these projects has led to the creation of about 4,500 jobs in the subregion, as well as a significant improvement in the quality of life of at least 24 million people through support to States in the fight against COVID-19.

Examining the Note on the outcome of the bond issue through a public offering, the press release noted that shareholders were pleased with the smooth conduct of the operation which resulted in the collection of CFAF 107 billion. The progress made by the Bank on this point is also considerable, because the imbalance of resources on the commitments of more than 117 billion F CFA that the Bank presented in 2016, not only is, to date, completely resorbed, but also became surplus. As for the evaluation of the value of BDEAC's shares, it confirms its growing attractiveness. BDEAC now holds the assets that should enable it to carry out its financial rating project by an international agency.

The General Assembly of BEAC led to a press conference co-hosted by Minister Ludovic Ngatsé and the President of the BDEAC, Fortunato Ofa Mbo Nchama.

Last week, in accordance with the Bank's statutes, we had a Board of Directors meeting, which took decisions. Some of these decisions were within the competence of the General Assembly, which took a decision today. In general, there was one main point, namely the approval of the Bank's financial statements. But we also gave an overview of the Bank's general situation.

On the financial statements, we note with satisfaction the fact that the Bank has done brilliant results. In spite of the crisis situation, it is profitable to the tune of 13 billion CFA francs. This is exceptional. It is almost the same level as in the good years. We would like to thank the President of the Bank and the Vice-President Marcel Ondélé, as well as all the employees, for this work. As you know, our continent, like the entire world, experienced an extremely difficult year in 2020, with the health crisis, which then became a major economic crisis, with countermeasures that virtually closed countries off from each other, and even restricted the movement of populations within countries.

This had a significant impact on our activities. But the Bank's Presidency made the necessary efforts to anticipate, to reorient the strategy, and to manage, which meant that the results were preserved. On the contrary, there are many positive things! Notably, in the mobilization of funding. Congo- Brazzaville, for example, will continue to benefit from support in the years to come. This is in line with the loans that have been approved by the Board of Directors. Last year, the Bank granted member states CFAF 90 billion in support for the fight against Covid-19. This is exceptional when compared to large institutions. Compared to the Bank's own resources, this is a colossal effort! For the Congo too, we had the support. The Congolese government can only thank the Bank's presidency for this attention given to the Congo. We will continue to work hand in hand to ensure that our commitments to the Bank are respected, so that the Congo that hosts the Bank is the one that is exemplary. This is the instruction we have received from the President of the Republic, His Excellency Denis Sassou-N'Guesso, and the Prime Minister, Anatole Collinet Makosso. I represent the Minister of Finance, Budget and Public Portfolio, Mr Rigobert Roger Andely, who is unable to attend. They have all instructed me to reaffirm to the President of the Bank that all efforts that the Congo can make will be made, and that the collaboration must continue. Because the Head of State, Denis Sassou-N'Guesso, has enormous ambitions for the Congo. In particular, in his program "March toward Development", with enormous investments. So we are also counting on the Bank. The Bank intends to mobilize about 100 billion CFA francs over the next two years for the Congo! We are working to make this happen in the days, weeks, months and years to come.

How do you explain the Bank's profits and what will they be used for?

Explanation by the President of the Bank

I would start with an illustration to explain the profits, in the sense that we can do better in Central Africa. It is not because things are going badly elsewhere that they must necessarily go badly in Central Africa. We should be proud of what we are able to do better, while elsewhere people are suffering the most difficult situations.

As for the use of profits, I would say that the Bank's mission is to finance development. This is what the Bank's resources are used for: to finance the development of our sub-region; to support States in their development; to support private economic operators in their investment projects, so that the Central African economy can boost, so that this economy can diversify, so that Central Africa can produce what it consumes, and not live off imports from other sub-regions (...). 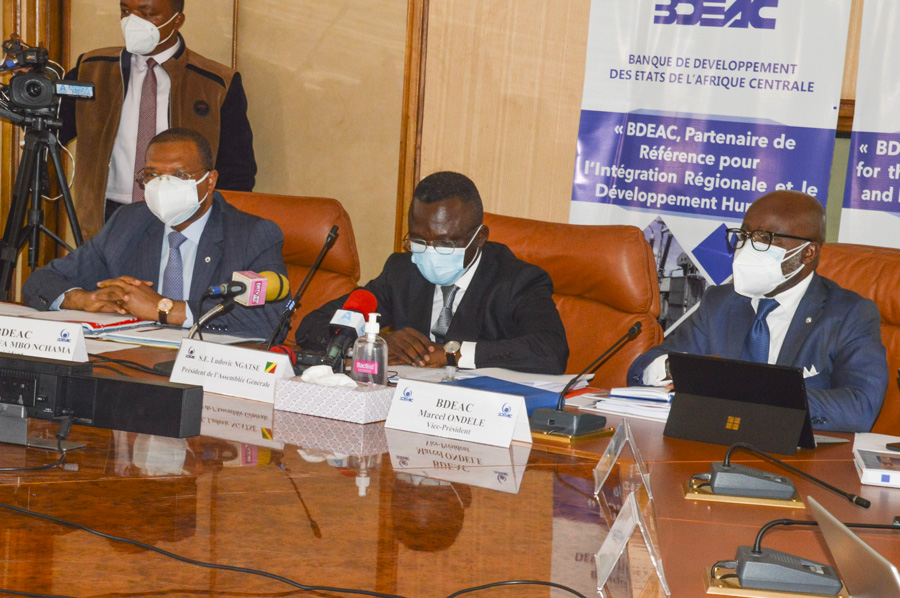