Rigobert Roger Andely, Congolese Minister of Finance, Budget and Public Portfolio, François Barateau, French Ambassador to Congo, and Maurizio Cascioli signed a credit agreement on Friday 24 June 2022 in Brazzaville, enabling France to provide Congo with budgetary support of 67.5 million Euros, or  CFAF 44.3 billion, over the period from 2022 to 2024.

This budget support, implemented by the French Development Agency (AFD), aims to support the Congolese government's efforts towards the country's economic and social recovery following the adoption on 21 January 2022 of a new programme with the International Monetary Fund (IMF) for a total of USD 455 million. This support will be provided in three instalments. The first of 30 million Euros, i.e. 19.6 billion CFA francs, will be paid as soon as the Congolese Parliament ratifies the credit agreement. The second instalment of 20 million (13.1 billion CFA francs) and the third of 17.5 million Euros (11.4 billion CFA francs) will be made in 2023 and 2024 respectively, subject to the successful implementation of the Programme with the IMF.

This agreement confirms the commitments announced by France during the Extraordinary Summit of Heads of State of the Central African Economic and Monetary Community (CEMAC) held in Yaoundé on 18 August 2021, and reflects the strength of the partnership between Congo and France.

During the ceremony, the French Ambassador recalled that this budgetary support will be regularly monitored, with attention paid to the efforts made by the Government to achieve the objectives of the Programme concluded with the IMF, particularly in the area of public finance and domestic debt management reform. Finally, he emphasised the presence of France alongside Congo in its efforts to strengthen the governance framework.

For his part, the Minister of Finance, Budget and Public Portfolio welcomed this financial contribution from France to support the reforms already undertaken by the authorities, which will enable them to continue their efforts in terms of macro-economic stability as part of the programme concluded with the IMF and to support the Congolese authorities on a path of diversification, economic growth and the fight against inequality, in line with the National Development Plan (NDP). 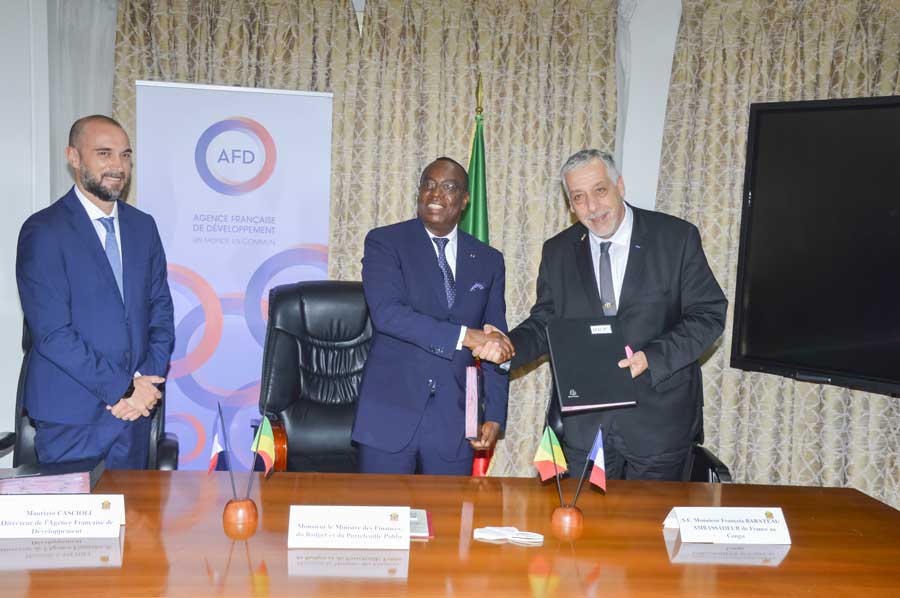