Double handover at the Ministry of Finance, Budget and Public Portfolio

Jean-Baptiste Ondaye takes over the helm of Finance and Ludovic Ngatsé of the Budget and Public Portfolio
27 Sep, 2022

Talking about Jean-Baptiste Ondaye, his successor at the Ministry of Finance, Rigobert Roger Andely told him that in 15 months of governance at the Ministry of Finance, he has not had the time to solve all the problems related to financial governance. However, he said, during the fifteen months at the head of the Ministry of Finance, he has advanced a number of urgent issues, including the hydra of debt, that is to say, the over-indebtedness of Congo. He took the opportunity to thank the international financial partners who have made it possible to begin to reduce his country's debt. He cited, in particular, France, China, the United States and Russia.

Rigobert Roger Andely thanked President Denis Sassou-N'Guesso who trusted him several times, namely: twice Minister of Finance; it was he who sponsored his candidacy which enabled him to occupy twice the post of Vice-Governor of the BEAC, and twice that of President of the Board of Directors of the Sino-Mongolese Bank for Africa BSCA.

The outgoing Minister of Economy and Finance, Jean-Baptiste Ondaye, took the opportunity to state that ‘’it is under the sign of the consolidation of the precious achievements of our country in the area of public finance, under your leadership, Mr. Outgoing Minister, that I intend to place my action. This is why I will not deprive myself of your precious advice for the conduct of my action in this department’’. He added that ‘’I would also like to count on the availability, competence and efficiency of the executives and agents of this Ministry whose strategic character for the smooth running of the State and the nation requires no demonstration’’.

In his speech, Minister Rigobert Roger Andely congratulated his incoming colleague, Ludovic Ngatsé, on his appointment. "Allow me to take this opportunity to thank you, on a personal basis, for having been Minister Delegate at my side, with great efficiency, discipline and respect for the hierarchy. These are qualities that tend to disappear in Congolese Public Administrations.

Mr Minister, I am reassured and convinced that you will, without any doubt, accomplish the mission that the Head of State has entrusted to you. And this for three reasons.

Firstly, at the level of the Budget, where you have accumulated a lot of experience, both alongside Minister Calixte Nganongo and at my own side. And you have given us a lot in this respect, because of your training as an accountant.

Then, I am also reassured about the Public Accounts aspect. And here you are, once again, in your field, because when I knew you, I was Vice-Governor of the Bank of Central African States (BEAC) in Yaounde (Cameroon), and you were my Auditor. I had already appreciated your qualities in this field. And I am sure that you will use these qualities, not for the benefit of private firms, but this time for the benefit of our country.

Finally, I am optimistic about your future management of the Public Portfolio, thanks to your back-ground. Moreover, you know the State-owned companies under supervision, having audited them at the private firm Ernst & Young, and having followed them as Minister Delegate in charge of the Budget. I am sure that you will bring real added value to this. Because I, in one year, with my nose to the grindstone, to reduce the debt; with my nose to the grindstone, to restore the financial credibility of our country, I must admit that I have not had much time for this important sector of our Economy. I am sure, Mr Minister, that you will devote much time to this sector.

Taking the floor for his remarks, Minister Ludovic Ngatsé declared: ‘’For the great work we have accomplished at the head of this Ministry and for which you have followed the convincing results underway, notably with the progressive restoration of our macroeconomic balances and our relations with our external partners, we say to all that we will continue our efforts to restore macroeconomic balances and return to budgetary stability in our country. Our management must always preserve the sustainability of the debt and our financing’’.

This double ceremony took place in the conference room of the Ministry of Finance, in the presence of representatives of the Presidency of the Republic, the Prime Minister's Office and the General Secretariat of the Government. 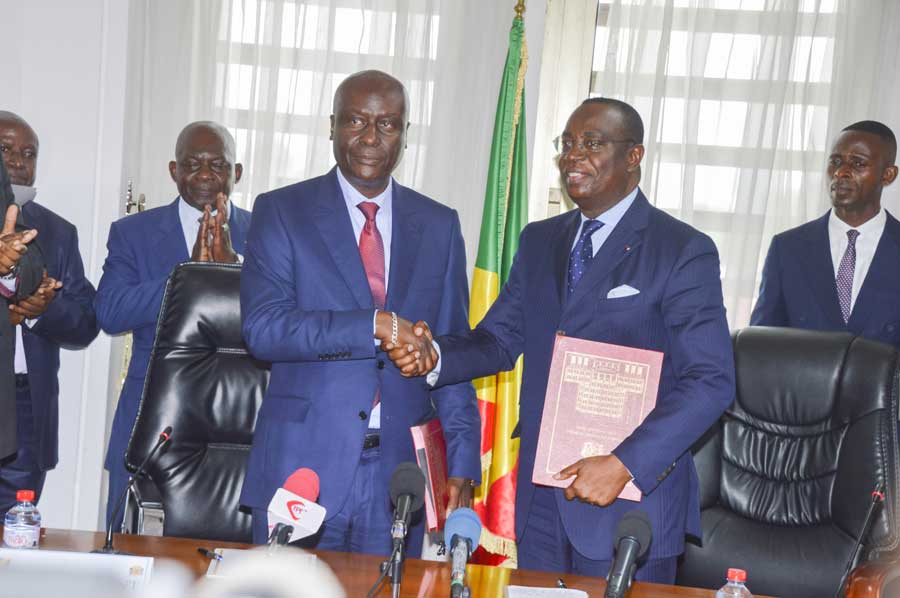