Five (5) New Directors General, an Inspector General and a Chairman of the Management Committee have committed themselves to perform their tasks with loyalty
02 Aug, 2022

On Monday 1 and Tuesday 2 August 2022 in Brazzaville, 5 new Directors General, an Inspector General and a Chairman of the Management Committee were installed in their functions by Wilfrid Albert Ossié, Director of Cabinet of Rigobert Roger Andely, Minister of Finance, Budget and Public Portfolio.

The seven Senior State officials, recently appointed by the Council of Ministers and confirmed by Presidential Decrees 2022-416; 417; 418; 419; 420; 421 and 422 of last Thursday 22 July, pledged to carry out their tasks to the fullest in order to merit the trust bestwed in them by the Head of State, Denis Sassou-N'Guesso; the Prime Minister and Head of Government, Anatole Collinet-Makosso; the Minister of Finance, Budget and Public Portfolio, Rigobert Roger Andely; and, of course, his Director of Cabinet Wilfrid Albert Ossié, who represented the Minister at this series of handovers and installations which were coordinated by the Administrative and Legal Advisor (CAJ), Audrey Mapithy Ma Mapithy.

The first to be installed was the new Chairman of the Board of Directors ofthe  Remittances Regulation Agency (ARTF), and Advisor to the Minister of Finance at the time of his installation. Dominique Ursel-TsonoNdzalé said that this was the third time he had taken part in an induction ceremony of the ARTF’s leadership.

First, in 2020, when he was appointed as ARTF's interim DG, replacing the previous interim DG, Mr Goma, who had succeeded the late DG Jean Raphaël Robert Massamba-Débat.

Then, in 2021, when he in turn passed the baton to his interim successor, Basile Jean Claude Bazebi.

Finally, in 2022, when he will take up his duties at the head of the Management Committee which will be in place in a few days. This means that he knows the ARTF's files well.

‘’ARTF is administered according to the laws and regulations, by a Management Committee, as a deliberative body, while the management of ARTF is the responsibility of the General Management’’, said Dominique Ursel-TsonoNdzalé. ‘’I will be working to achieve the objectives for which ARTF was created’’, he said.

The second senior State official to be inducted into the ARTF's headquarters, at the same time as the first, is Basile Jean-Claude Bazebi, who has been confirmed as the institution's Director General since 2021... That is to say, a year's worth of hard work has led to this mark of confidence on the part of the hierarchy, through this confirmation. It is therefore a technocrat who has been managing this structure for many months. Not very prolix, the new ARTF DG exhorted his collaborators in six words: ‘’Let's work first, the rest will come later’’!

Darel Gildas Ngouala, the new Inspector General of Finance (IGF), was the third executive to be inducted into his command chair. The newly promoted IGF had already occupied this position for a year, in 2021, as an interim. Aware of the IGF's role as a watchdog for the Minister of Finance, Darel Gildas Ngouala did not ignore the fact that his superiors can also take charge of their own affairs. As far as he is concerned, ‘’I count on the support of the Minister, the Director of Cabinet and my collaborators in the appropriation of working methods for the accomplishment of the missions assigned to the IGF. The train of good governance and the fight against corruption is on the move. It must not leave us on the platform’’, said Darel Gildas Ngouala.

For his part, Jean-Pierre Nonault was the fourth technocrat to be officially established in his prerogatives. He is now confirmed "Director General of National Financial Institutions" (DGIFN), a position he had held for a year, on an interim basis.

The fifth technocrat to be confirmed and officially installed in his duties is the Director General of the Budget, Jean Claude Iwanga. Several times interim in this position before, the new Boss of the DGB knows perfectly the files of this institution.

Joël Ikama-Ngatsé was the sixth senior official to be officially installed. He is now the Director General of Public Procurement Control (DGCMP). After having acted as interim in this position.

Finally, the seventh to be promoted was LordMarhynoGandou, who was appointed Director General of the Congolese Agency for Information Systems (ACSI). The handover between Jeannot Mavoungou, the outgoing Director General, and LordMarhynoGandou took place in a friendly atmosphere, to the applause of workers and collaborators. In reality, the new Director is an agent of this entity, who spent several years on secondment to the cabinet of the Ministry of Finance, and who is returning to the starting point. 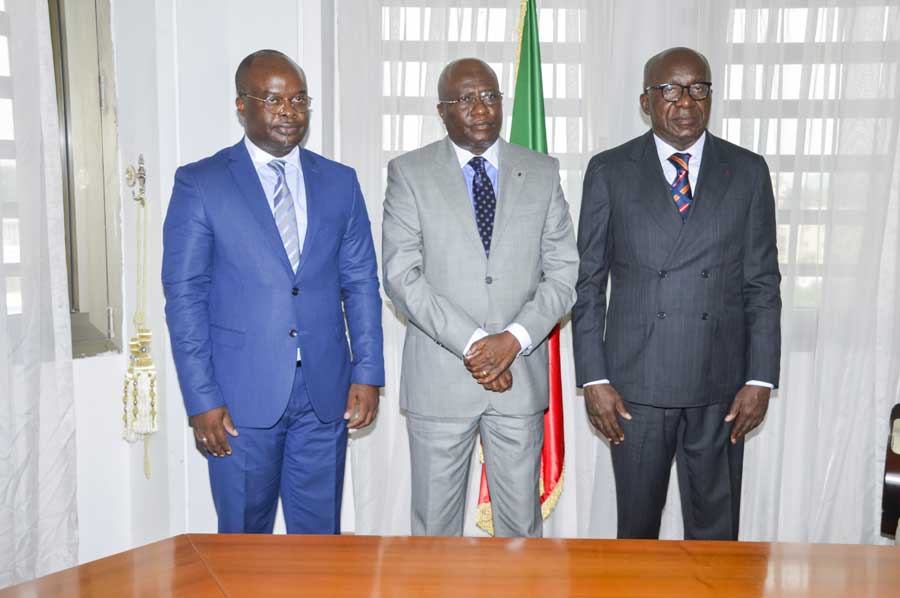