The Two Houses of Parliament, led respectively by Isidore Mvouba, Speaker of the National Assembly, and Pierre Ngolo, President of the Senate, have examined and adopted with amendment in the National Assembly and without amendment in the Senate unanimously, the Draft Amending Finance Bill for the 2021 financial year, Sunday 8 and Monday 9 August 2021. The Finance Law for the year 2021 is set at CFA francs 1,671 billion 635 million in revenue and CFA francs 1,521 billion 15 million in expenditure.

This Budget shows a fiscal surplus of CFAF 150 billion 62 million, intended to finance the cash deficit of CFAF 542 billion 860 million. The balance of the cash deficit, i.e. CFAF 392 billion 240 million, will be funded by external contributions.

At the national level, the scale of the COVID-19 pandemic and the economic crisis have curtailed economic activities. Thus, despite a significant gain of 4.8 points, a recession of -0.5% is projected for the end of 2021, compared with -5.3% in 2020.

This recessionary context has had an undeniable impact on the implementation of the Financial Programme concluded with the International Monetary Fund (IMF), thus aggravating macroeconomic imbalances and the drying up of resources. The public policy objectives assigned to the Government for the five years of the presidential term (2021-2026) revolve around three governance poles, namely: institutional and systemic governance; attractive economic and financial governance; and social and solidarity governance.

Subsequently, despite the budgetary constraint linked to the low volume of mobilisable resources, which implies a measured operationalisation, the general orientations of the rectifying finance bill require a better alignment of the strategic objectives of macroeconomic policies with the priorities of the government. These objectives include the resumption of negotiations with the IMF for a programme supported by the Extended Credit Facility (ECF); the acceleration of economic diversification to promote job creation; the restoration of major balances; the use of domestic and international financing negotiated on the best terms; simplifying and adapting the taxation of Small and Medium-Sized Enterprises (SMEs) and developing financial and non-financial support mechanisms for Congolese SMEs, to improve their contribution to the Gross Domestic Product (GDP); continuing to negotiate debt service suspension Agreements with trading partners, with a view to achieving public debt sustainability; The Government will continue its efforts in the health sector by setting up a fund for the vaccination of the population; combating all forms of public resource leakage; improving the national financial resource base; strengthening transparency in the management of debt and natural resources; and expanding social safety nets in order to reduce poverty.

In order to give substance to the recovery and lay the foundations for an inclusive and resilient economy, the Government will take targeted fiscal policy measures that will focus on: the efficiency of public revenue collection; the rationalisation of public spending and debt control.

The Main Assumptions of the 2021 Amending Finance Law, according to Minister Andely

It is on the basis of the revenues collected during the first six months, the seasonal behaviour of taxes and the projected level of economic activity that the fiscal revenue forecast for 2021 has been revised. The projections for customs duties and indirect taxation are based on import-export activity.

Revenues from direct and indirect taxation and customs duties and similar taxes represent 6.6 % and 1.6 % of nominal GDP respectively.

Social contributions, deducted from the salaries paid to government employees, represent 1% of GDP.

Grants are reduced to one third of their initial level, i.e. 0.2 % of GDP.

government revenues are maintained at the level of the initial 2021 budget law. Dividends are increased by 25 % compared to their initial level.

The budgetary adjustment scenario adopted projects a contraction in State expenditure of 7.5 % compared to its initial level, or 2.5 % of GDP.

The financial costs of the public debt will increase by 22.3 % to take into account the maturities of the Treasury bonds and bills issued.

For wages and salaries, the gradual reduction in personnel expenditure will be continued by encouraging retirements, with the possibility of increasing staffing levels in Education, Health and Social Affairs. This expenditure will fall by 3.1% from its initial level, due to savings already made in the first six months of implementation.

Goods and services will undergo adjustments requiring efforts to reduce expenses by 16.8 %.

Transfers will fall by 10.8 % in order to continue the reduction of the State's living expenses.

Investments will contract by 15.6 %, in view of their low level of execution both on external resources and on freely allocable means.

Other expenditure, formerly known as common charges, will increase by 4.9 %.

The annexed budgets are maintained at their initial levels. On the other hand, the Special Treasury Accounts will decrease by 6 %.

The overall budgetary balance will deteriorate by 28.1% due to the poor projected performance of revenues (-11.1 %), in line with economic activity.

The objective of containing the basic non-oil budget balance at a relatively controlled level implies broadening the tax base and improving the performance of tax services.

In terms of financing, an improvement in resources of 10.4 % is projected. On the other hand, cash expenses will fall by 13.1 % compared to their initial forecast.

The Government's budgetary adjustment efforts, with a view to economic recovery in the long term, have been slowed down by the poor economic situation and the effects of the COVID-19 health crisis. The orientation of fiscal policy is in line with the economic and financial reform programme of the Central African Economic and Monetary Community (CEMAC). Thus, the Government will consolidate the efforts already made to ensure the consolidation of public finances and the necessary budgetary adjustment. To this end, in line with the pursuit of stability in the macro-budgetary framework, budgetary policy will consist of strengthening public revenue collection mechanisms; controlling budgetary expenditure, taking into account priorities; continuing efforts to reduce the non-oil primary deficit, in order to gradually bring it down to a sustainable level in the medium term; and controlling the debt trajectory.

It should be recalled that this Amending Finance Law came after the appointment of the new Government on 15 May, following the presidential elections of 17 and 21 March 2021. 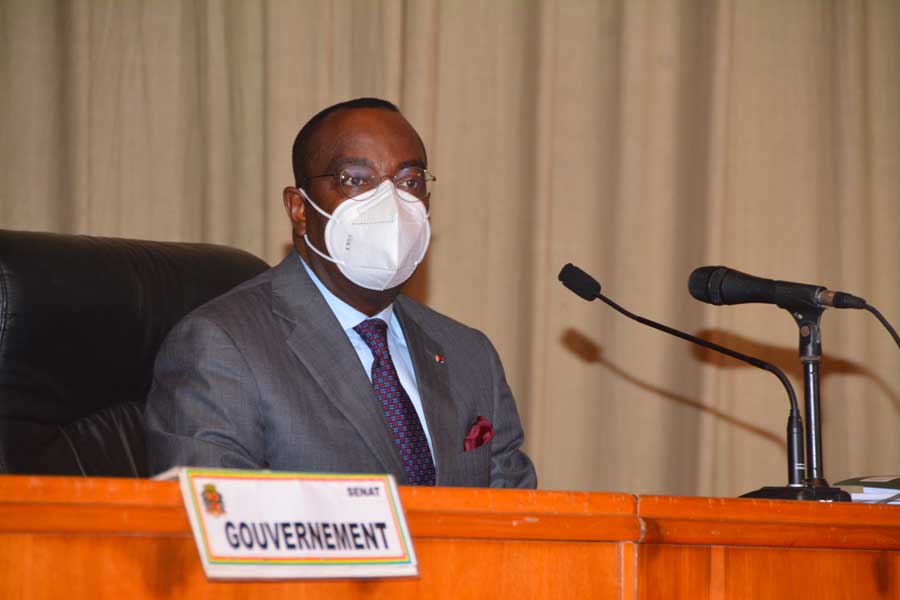