Organisation of a seminar on financial mediation

There is nothing to prevent the Implementation of a Financial Mediation Body.
25 Nov, 2020

Wednesday 25 November 2020 in the Congolese capital, representatives of banks and microfinance institutions, justice and civil society actors working in the field of consumer rights, coaches and students in economics at the University Marien Ngouabi and the leaders of the Chamber of Commerce of Brazzaville agreed to set up, in the coming days, a financial mediation body to propose an amicable and non-coercive settlement of financial disputes.

This seminar, opened and then closed on behalf of the Minister of Finance and Budget, President of CNEF, Calixte Nganongo, by Michel Dzombala, Secretary General of CNEF and National Director of the Bank of Central African States (BEAC), was placed under the theme of "Implementation of Financial Mediation in Congo: state of play and prospects".

From this inventory, it will be noted that there was no legal framework for dispute settlement before the creation, in 2019, of National Economic and Financial Committees in the CEMAC (Economic and Monetary Community of Central Africa) Area.

However, the former National Credit Council (CNC), had tried to resolve, to some extent, the conflicts between the parties, but without foreseeing confrontation! In addition to the absence of confrontation, this Mediation suffered from the lack of popularisation.

Today, Mediation is governed by CEMAC Regulation No. 03/2019, which not only created the CNEFs, but also stipulates, in section 9, that Mediation will be provided by these Committees, in each of the six Member States (Cameroon, Congo, Equatorial Guinea, CAR, Gabon and Chad).

The need to set up this Mediation body in Congo was demonstrated by the facilitators of the three panels scheduled during the Seminar, including the university lecturer, Daphtone Lekebe Omouali and the consumer advocate, Dieudonné Moussala.

This future Mediation will be able to draw on the Congolese experience (shared in person by the Delegate General of the Centre for Mediation and Arbitration in Congo-CEMACO, the Brazzaville Chamber of Commerce, Corneille Moukala Moukoko); the Senegalese experience (presented, by videoconference, by Habib Ndao and Samba Ndiaye, members of the Quality Financial Services Observatory-OQSF) and the French experience (presented, by videoconference, by Sabine Desvaux, member of the Assessment and Consumption Mediation Motoring Committee-CECMC).

At the end of a day of work and discussions, the participants adopted a number of recommendations, including the setting up of a Financial Mediation Body in Congo, aMediation Observatory, responsible for monitoring the solutions proposed to the parties in conflict by the mediation body, but also an outreach strategy.

It should be noted that, nowadays, this alternative dispute resolution mechanism, which complements formal judicial procedures, is adopted throughout the world, due to the speed, low cost, simplicity and facilitation of the cases it offers. 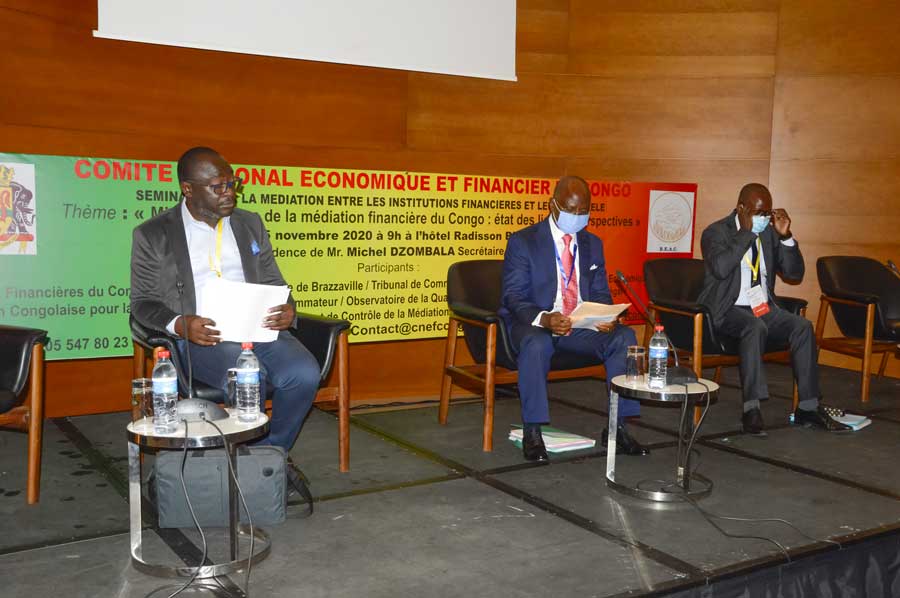