On December 7 2016 in Brazzaville, Congo and the World Bank signed two funding agreements for the Brazzaville and Pointe Noire Urban Development and Restructuring Project and the Education Support Project. The documents were signed by Congolese Minister of Finance, Budget and Public Portfolio, Calixte Nganongo and the World Bank's Director of Operations for the Republic of the Congo, Ahmadou Moustapha Ndiaye.

The Urban Development and Restructuring Project for precarious neighbourhoods of Brazzaville and Pointe-Noire is worth 120 Million US dollars, including 80 Million by the World Bank and 40 Million by the Congolese government. It will improve people's access to basic urban services in the selected neighbourhoods and strengthen municipal management capacities of national and local authorities.

The project will also provide the Congo with a dynamic land-use planning scheme as a modern tool for planning and urban development. According to Ahmadou Moustapha Ndiaye, this project thus broadens the scope of action of the Water, Electricity and Urban Development (PEDDU) project, with emphasis on an integrated and inclusive dimension.

"It is thus the first step in a programmatic approach that integrates a curative dimension that consists in restructuring precarious neighbourhoods and a proactive dimension that consists in preventing their formation. This project is of significant importance at a time when the Republic of Congo is one of the most urbanized countries in Africa, with more than 64% of Congolese living in the city, more than half living in Brazzaville and Pointe-Noire” said Ahmadou Mustapha Ndiaye.

The Education Support Project is in line with the Congolese Government's strategies for development of the education sector. These strategies have been supported by the World Bank since 2000. The policy is to invest in education on three principles: sufficient supply; accessible and equitable; quality and pertinence in order to meet the needs of the economy and the job market.

"The World Bank's support for education between 2000 and 2015 (Basic Education Support Project) has contributed to an increase in the supply of education, particularly through the rehabilitation and expansion of more than 1000 classrooms; Support for the revision of primary and secondary school curricula; and the acquisition of more than 1.250.000 textbooks and guides for teachers. This has contributed to the increase in primary enrolment and completion rates from 107% to 120% for schooling and from 50% to 81% for completion, and to achieving a boy-girl parity in 2011-2012 at the primary level” Ahmadou Moustapha Ndiaye pointed out.

Minister Calixte Ngonongo and his colleagues Jean Jacques Bouya and Anatole Collinet Makosso, respectively Minister for Territorial Development and Public Works, and Minister for Primary, Secondary Education and Literacy, lauded the endless support from the Bank of the Government of Congo. They reaffirmed the will of the Congolese government to spare no effort in the implementation of these two projects. 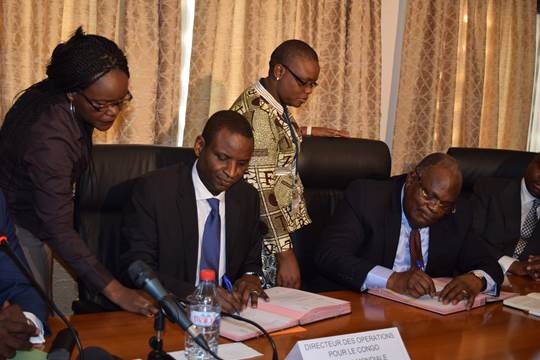