The Minister Delegate for the Budget in front of the press

Estimated at CFAF 182 billion with the contribution of the London Club which joined the initiative, this debt will now be reinvested in the Congolese economy, social and hospital modernization. Similarly, it will be used mainly to deal with the current pandemic and those that may arise. This good news was given on 10 June 2020 by the Minister Delegate for the Budget, Ludovic Ngatsé, who was received on the 8 p.m. news. It is within the framework of the initiative for the suspension of debt service, taken by the betting club in favour of certain African countries including Congo, that this salutary decision was taken. Here is the interview granted by the Minister Delegate for the Budget Ludovic Ngatsé to journalists from the national and international press.

Question: Mr. Minister, what does it mean when we talk about the initiative to suspend debt service and what are the criteria that have militated in favour of the Congo?

Ludovic Ngatsé: When we talk about the debt service suspension initiative, it means that the public creditors gathered within the Paris Club, which brings together states and multilateral organizations, have thought about how to support countries that are indebted to this grouping, in order to help them during this crisis generated by the coronavirus pandemic. Can we consider this to be good news for the Congo? Of course we can. I would say it is excellent news. It is one of the very first, after many other battles fought around the President of the Republic, the Prime Minister and the Minister of Finance, who have worked hard to prepare the file and to ensure that the Congo, which met the criteria, could be eligible for this initiative.

Question: Mr. Minister, can you enlighten the Congolese on the real amount of the debt to the Paris Club?

Ludovic Ngatsé: Before talking about the actual amount, we must first talk about the criteria. To be eligible for this initiative, you had to be a developing country; have a program with the IMF; and not have arrears. Basically, you had to be a good student, in terms of your commitments to the international financial system. The Congo met all the criteria. We had no arrears, we had a programme with the IMF that was being implemented and we were a developing country. The amount directly linked to the Paris Club is in the order of CFAF 130 billion per year. But you know that within the framework of this initiative, all other creditors, notably those grouped within the London Club, were asked to follow the Paris Club's initiative. And this is where everything becomes interesting because if we broaden the range of creditors, we can go up to much more substantial amounts. Besides, at this date, we can affirm that in addition to the 130 billion FCFA, we already have about 52 billion more. This makes a total of CFAF 182 billion with the contribution of other partners who have joined this initiative. This represents a saving of CFAF 182 billion for fiscal year 2020.

Question: Mr. Minister, the health crisis related to the coronavirus has negatively impacted local businesses. They will certainly resort to banks. Will the State stand as guarantor with the banks to guarantee these loans and to what extent?

Ludovic Ngatsé: We belong to a sub-regional community called CEMAC. Within this framework, there is a reform program that basically has a three-level solution; first at the CEMAC level through the intervention of the Central Bank. It was agreed on measures to reduce the Central Bank's intervention interest rates so as to allow banks to recharge their batteries. The Central Bank has simplified the conditions of resourcing at its counters. Secondly, the Central Bank also asked the banking commission to relax its conditions. At the local level, the government has set up what is known as the Task Force, which has produced important documents, particularly in support of businesses. These documents include tax, customs and other measures. The third level concerns the actual banking support and guarantee measures. Within the framework of the guarantee fund, there is in fact a compartment of this fund which is reserved for business support.In this compartment, a sum of CFAF 25 billion is reserved, in particular, for debt guarantees that companies could subscribe to from the banking system. These are roughly the three levels of intervention of our sub-region, the government and our system in general to effectively support businesses so that they can more easily get through this difficult period related to the coronavirus pandemic.

Question: What about support from the Paris Club?

Ludovic Ngatsé: In return for the support of the Paris Club, there are commitments. How is it going in fact? We should have paid roughly the 182 billion FCFA between now and December 31, 2020. We are told not to pay them directly to the Paris Club. But we are being asked to use this money to deal with the pandemic on three levels: health, social and economic. The government in its rectified budget intends to use these funding opportunities to meet the expenses related to the pandemic and to prepare our health system to protect itself against further pandemics. This funding will make it possible to improve the quality of the technical platform of hospitals and to expand the range of health care services. Moreover, the rectified budget provides for the construction of two general hospitals.

Question: Where are we at with the IMF and what are the prospects for other ongoing negotiations?

Ludovic Ngatsé: With the IMF we have a programme that is being implemented. As far as the Republic of Congo is concerned, we continue to respect the commitments we have made. As you recently followed, the President of the Republic had stressed in an interview with France 24 and RFI, that the government has requested specific support in the framework of the IMF's rapid credit facility. We are currently working with IMF staff to implement this facility. You know that with these institutions, it is never easy. So the government staff are working hard to provide all the necessary answers. We believe, as the President of the Republic has stressed, that we will have a happy response in the days and weeks to come.

Interviewed and transcribed by the newspaper Le Patriote. 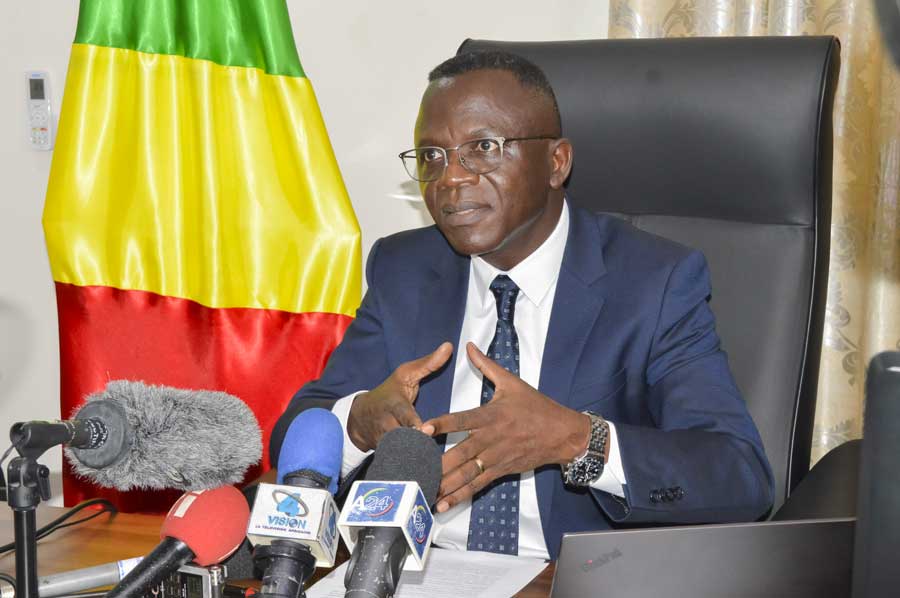