Presentation of the 2016 amended finance bill at the national assembly

Honourable Members of the Bureau of the National Assembly,

On behalf of the President of the Republic, the Prime Minister and all administrative authorities, permit me introduce myself to you, legislators, for the first time and to accomplish a republican duty.

It is a special honour for me to present to you the rectified 2016 finance bill of the new Republic, and this in conformity with article 17 of the organic law of 3 September 2012 on the State’s financial regime.

In my capacity as Minister for Finance, I would like to reiterate before this august Assembly my deepest gratitude to the President of the Republic, Head of State on the one hand, and my distinguished consideration to the Prime Minister, Head of the Government on the other hand, for the confidence placed in my humble person for the execution of this heavy task.

It is our joint responsibility, in light of the deteriorating international economic situation, which imposes on us unavoidable budgetary readjustments necessary for preservation of macroeconomic balance.
The legal basis for this amended finance bill is the application of provisions of Article 8 of Law No. 20-2012 of 3 September 2012 on the organic law relating to the State's financial regime, I quote:

"An amended finance bill shall be tabled to Parliament by the Government if:
• the achievement of the financial equilibrium defined by the finance law of the year is compromised;
• revenues recorded during the year are much lower or higher than expected;
• new legislative or regulatory measures affect execution of the budget ".

Since the coming into force of the 2016 finance law, the level of oil revenues is far below forecast of the initial finance law.
The hypothetical price of the Congolese barrel adopted in the said finance law is 42.5USD. However, as keen observers, you noticed that during the first quarter of 2016, the price of the barrel was far below this level.

By way of illustration, the barrel of Brent which serves as a reference in the calculation of the oil revenues of the State even sold at 26 USD on 20 January 2016 on the London market.

Thus, the levels of oil prices on world markets affect oil revenues and thus the balance level desired by the Government.

On the other hand, Congo’s transition to the new Republic generates new expenditure, due to the institutions created by the new constitution and changes at the level of the government. Taking these new institutions into account requires changes in the allocation of resources and the inclusion of new expenditure in the State budget.
That is why the Government has amended the initial finance bill and tabled to parliament this bill whose details I shall outline to you.

My remark will focus on the following three main points:

• New assumptions about future oil price developments and their impact on government priorities.

It is difficult to understand the meaning and even to make a credible analysis of this bill without having an idea on the international environment, which has been very unpredictable for the past two years, and the national context.
This amended finance bill is drafted in an international context marked by a gloomy economic picture and instability in world oil markets.

Recent forecasts by the International Monetary Fund indicate that recovery of global economic activity remains fragile and slow. The growth rate is expected to increase only slightly to around 3.2% in 2016 against 3.1% in 2015.
Economic prospects for advanced economies is expected to improve in 2016 from the previous year. But they remain characterized by low productivity growth, unfavourable population growth and low demand which continue to hamper the recovery of growth. The latter would attain 1.9% in 2016.

Added to this are uncertainties about future oil demands in a context of European crisis and instability on world stock and oil markets.
Indeed, the exit of the United Kingdom from the European Union "BREXIT" could have as consequences:
- a fall in the pound sterling;
- an increase in interest rates, resulting in restrictions in the supply of credit needed to finance the world economy;
- a fall in stock market prices on financial markets resulting from panic on stock markets;
- finally, a contagious effect on independent international financial markets.

These different effects are likely to hamper global economic activity and, as a result, amplify a fall in oil prices resulting from insufficient demand.
Moreover, economic growth in emerging and developing countries that were the driving force for global oil demand over the past decade would only increase slightly this year from 4% in 2015 to 4.1% in 2016.
Thus economies of the CEMAC zone, most countries of which are oil exporters, are strongly impacted by the low level of oil prices. The Bank of Central African States estimates a drop in growth of about 0.75 point compared to forecasts of October 2015. This forecast is expected to stand at 4.3% in the CEMAC zone.

At national level, following the start of exploitation of the Moho-North deposit at the end of 2015, national oil production witnessed a slight increase. This would increase to 94,124 million barrels in 2016 compared to 89 million barrels in 2015.
Despite the low level of oil prices in the market, this increase in production is expected to help improve the growth rate to 4.4% in 2016 as against 4% in 2015.

The transport sector is expected to maintain its momentum, driven by the modernization of the Pointe-Noire Autonomous Port, the expansion of traffic on the Pointe-Noire-Brazzaville-Ouesso road and the continuous improvement of operational capacities Of the Congo-Ocean Railway (CFCO).
The telecommunications sector could see its business double with the extension of fibre optics.
Timber production and processing should be consolidated if growth recovery in advanced economies is confirmed.
Manufacturing industries are expected to boost growth with the entry into production phase of new cement plants including Ciment d’Afrique (CIMAF) in early October 2015 and Diamond Cement in 2016.

Improvement of energy and water distribution networks should favour supply of electricity and water services. In fact, production was consolidated through exploitation of the Imboulou hydroelectric dam, the Pointe-Noire gas plant and the start-up of the second Djiri water supply plant.

Concerning changes in taxation in general, this remain unchanged compared to the initial finance law which was already kept on hold.
However, with a view to broadening the tax base, adjustments were proposed for three taxes: the tax on remittances, the single tax on wages and the tax on electronic communications traffic.
Firstly, the tax on the transfer of funds refer to payments made by resident taxpayers to foreign currency bank accounts opened abroad, and for which the services or goods were delivered in Congo;

Secondly, with regard to the single tax on wages, this is the abolition of the planned exoneration international and governmental organizations, with the aim of restoring the fairness of the Congo's collection of duties not excluded by international law but rather national law;
Thirdly, the broadening of the tax base is aimed at extending the tax on electronic communications traffic to all telecommunications operators: telephone operators and internet service providers.

Finally, I come to the last point of my remarks, that of new hypotheses on the evolution of oil prices and their impact on priorities adopted by the Government within the framework of this bill.
The hypotheses confirmed in this amended finance bill for projection of oil revenues are as follows:
• the price of Brent at $ 39.468 per barrel;
• the price of Congolese crude oil at 35.000 USD per barrel, a discount of 4.468 USD;
• oil production at 94.125 million barrels;
• one (1) dollar exchanged at 600 CFA francs.

Moreover, despite the tightening of global financing conditions, influenced mainly by the transition of the Chinese economy, external revenues remain at the same level as in the initial finance law, i.e. 339.28 Billion CFA Francs, in conformity with implementation of the strategic partnership with China.
Uncertainties weighing on global economic prospects require prudent tax policies. Government will thus pursue a moderate fiscal policy coupled with effective budgetary discipline. Government actions are part of a trajectory that guarantees fiscal stability and the sustainability of public finance.

Government policy will thus focus on three main priorities, reflecting the will of the President of the Republic:
- Ensuring local development through the implementation of "accelerated municipalisation", Bouenza Municipality;
- Promoting progress towards development, in the completion of on-going work on infrastructure;
- And guaranteeing the functioning of the State.

Taking into account uncertainties on the evolution of oil prices and global economic prospects, in order to implement the main priorities of government’s action, under this finance bill, State resources and expenditure are re-assessed as follows:

Budgetary resources are set at 2.121.5 Billion CFA Francs, compared to 2.333 Billion CFA Francs in the initial finance law, hence a decrease of 9.1%. This decline can be explained mainly by caution on future changes in oil price.
Tax and customs revenues remain unchanged from the initial finance law and stands at 1.046.5 Billion CFA Francs. This level will be achieved through broadening of the tax base on remittances, the tax on electronic communications traffic and the single tax on wages.
Also included in the framework of measures aimed at improving tax revenues, the building of capacities of the tax and customs administrations, secure revenue and improve the collection of the tax on land titles and the overall tax rate, through a reframing of their methods of application.

In conclusion, the gloomy global economic context, with its adverse effects on national economy, calls for greater caution in the area of public finances. This is reflected in this amended finance bill, which is mainly aimed at controlling expenses, ensuring effectiveness in public spending and sustainability of public finances.
Honourable President of the National Assembly,
Honourable Members of the Bureau of the National Assembly,

Honourable Members of Parliament,
Ladies and Gentlemen,
This is the summary of the amended 2016 finance law submitted for your appraisal and approval.
Thanks for your kind attention 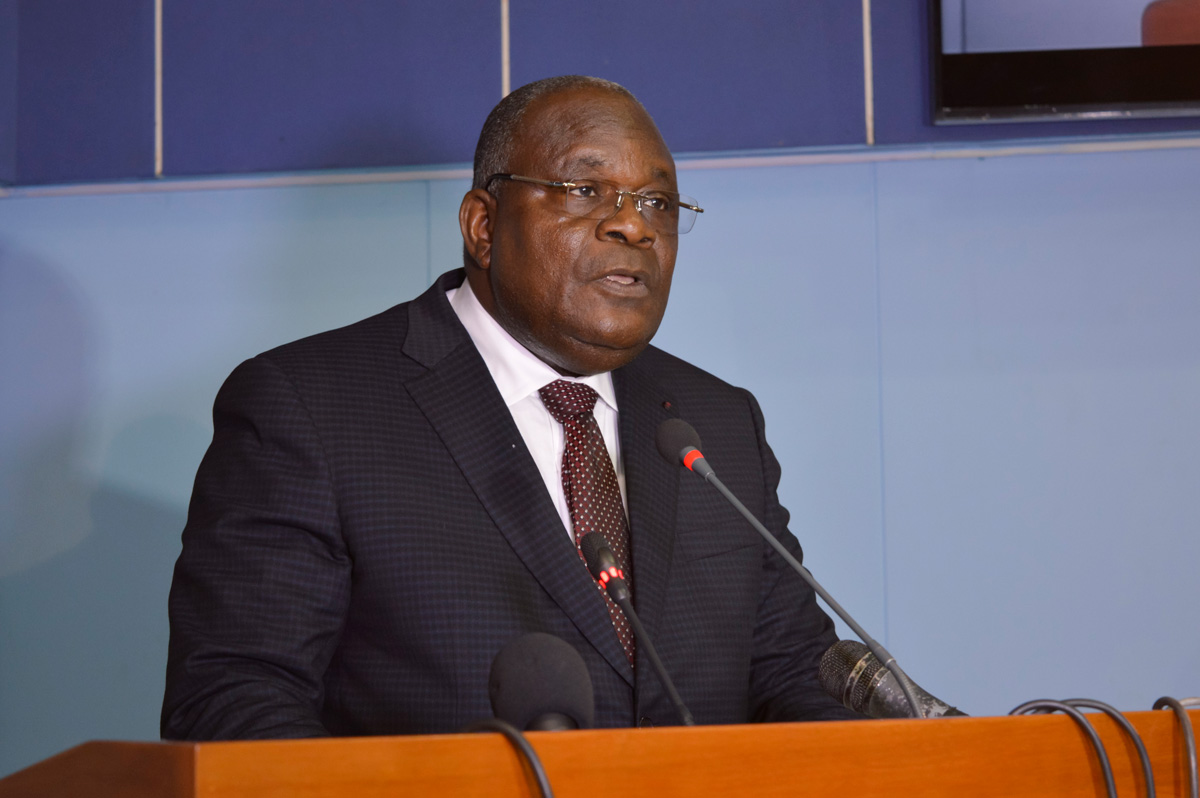