The President of the Republic of Congo, Denis Sassou-Nguesso, inaugurated the New Headquarters and the Head Office of the Ecobank Congo Group on Monday, 29 November 2021 in Brazzaville. The ceremony was attended by Anatole Collinet-Makosso, Prime Minister, Head of Government; Rigobert Roger Andely, Minister of Finance, Budget and Public Portfolio; and Cheik Travaly, Regional Director of Ecobank Group Central, Eastern and Southern Africa.

Located in Poto-Poto (3rd district of Brazzaville), on Avenue Amilcar Cabral, near the ELBO Suites Hotel, on the banks of the Congo River, the new 7-storey building of Ecobank, the pan-African bank, is “a modern working environment for the staff of this bank institution”, according to observers.

Speaking at the ceremony, Rigobert Roger Andely, Monetary Tutelage, said the Ecobank Group is an independent bank institution, operating in 33 African countries. It offers diversified bank services and employs a total of 15,000 people. The Congolese subsidiary was licensed by Order No. 5437/MEFB-CAB of 28 August 2007, after receiving the assent of the Central African Banking Commission (COBAC). It started operations on 29 February 2008. It manages 46,000 clients and has 7 branches in Brazzaville, Pointe-Noire, Dolisie and Ouesso. It is equipped with 41 ATMs and employs 161 staff.

Rigobert Roger Andely urged the Board of Directors of Ecobank to establish its structure in the hinterland, in order to facilitate wide access of the population to basic bank services. He noted that despite the health crisis and its negative impact on all the economies of the world, the Congolese banking system is globally resilient and continues to support the economy of Congo.

The Minister of Finance urged staff and economic operators to improve their performance and strengthen the influence of Ecobank in Congo. “To this end, the National Development Plan (NDP 2022-2026), which is currently being finalised, will be an important source of projects”, he said. He also called on economic operators to repay their loans so as not to weaken the banks. He also reassured the government's commitment to service its debt to the banking system, both that of the Brazzaville Club and direct loans or the floating monetary debt contracted during the issuance of Treasury Bonds and Obligations (BOT). “One of the fundamental objectives pursued by the government, through the programme currently being negotiated with the International Monetary Fund (IMF), is to strengthen the credibility of the Congo's financial signature,” he said. 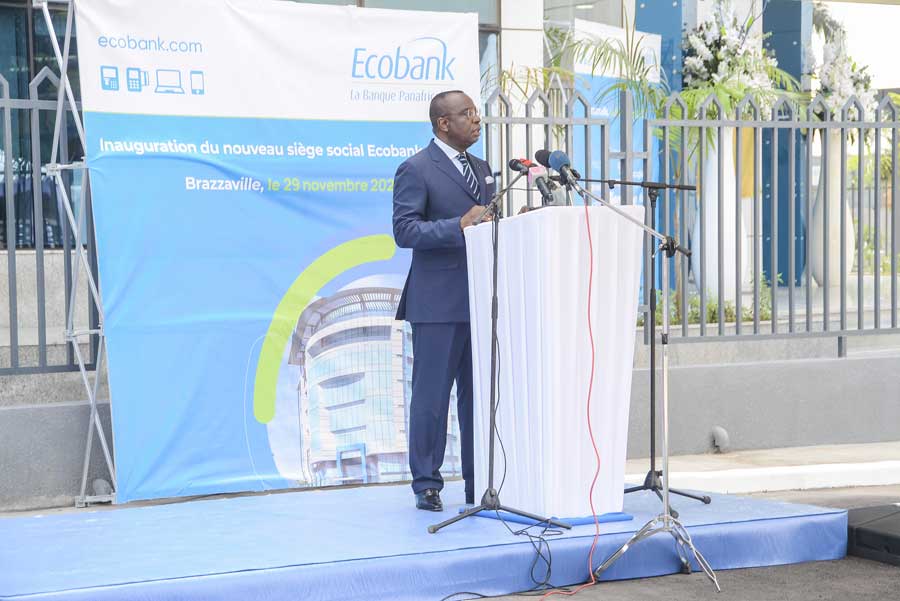