Rigobert Roger Andely requests an extension of the ISSD until June 2022
29 Nov, 2021

On Monday 29 November 2021, the Minister of Finance, Budget and Public Portfolio, Rigobert Roger Andely, representing the Congolese government, and the French Ambassador to Congo, François Barateau, for the French government, signed the Third Bilateral Agreement on the suspension of debt servicing with regard to France within the framework of the Debt Service Suspension Initiative (DSSI) decided by the G20 in 2020.

Minister Rigobert Roger Andely took the opportunity to thank the French government and make two requests in the following terms:

“Regarding the debt service suspension initiative (ISSD), I thank you, Excellency Ambassador, for what we have just signed. I would also like to thank France, through its decisive action, which I know from experience, and the Paris Club Secretariat, for having been at the base - I am weighing my words carefully - with other partners, in the elaboration, design and conception of this initiative, the benefits of which we are reaping today, not only with regard to France, as far as Congo is concerned, but also with regard to a number of other bilateral partners.

* Firstly, I would like to ask for France's support, through the Paris Club Secretariat, so that you can once again push for an extension of the suspension of debt servicing to the first half of 2022, because Covid-19 is not behind us; it is ahead of us, with the new variant that has just been discovered;

*Secondly, I would like you to be our advocate on a point that I had the opportunity to discuss with my friends at the International Monetary Fund (IMF) and the World Bank (WB). This is what the British or the Americans would call "the exit solution" to the ISSD. Indeed, we have to think, because we have pushed back deadlines, many important deadlines, just to a 6-year horizon, with 1 year of grace! This, in some cases, and certainly in most countries, could cause big bumps in due dates when we officially exit the SSDI.”

Mid-term impact assessment of the ISSD in Congo

Launched on 15 April 2020 by the G20 member states and coordinated by the Paris Club to address the crisis of the Covid-19, the ISSD is a solidarity tool that helps countries in a vulnerable situation face the impacts of the global crisis, as well as its economic consequences.

Initially scheduled to run from 1 May to 31 December 2020, this suspension of Congo's debt service to France has been extended once more until 30 June 2021 and a second time until 31 December this year.

“This agreement defines in particular the debts owed to France, the terms of the treatment of these debts and the interest rates. It covers a total amount of just over 622,000 Euros, or more than 408 million CFA francs. Since April 2020, this support provided by France to the Republic of Congo via the ISSD has enabled it to reorganise its debt to the tune of 38.2 billion CFA francs, or 58.3 million Euros. The resources thus freed up by this 3rd Debt Deferral Agreement will be allocated as a priority to financing expenditure aimed at mitigating the health and social impact of the Covid-19 pandemic and contributing to the recovery of the economy

In this difficult period, this initiative shows, once again, France's full solidarity with the Congo and its population, and reflects the excellence of the diplomatic relations and friendship that bind France and Congo”, said François Barateau. 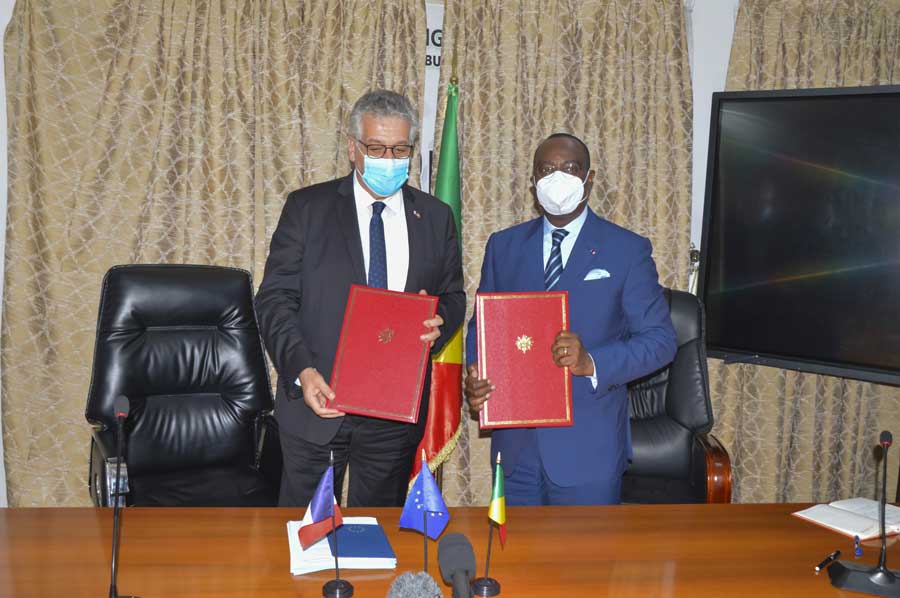